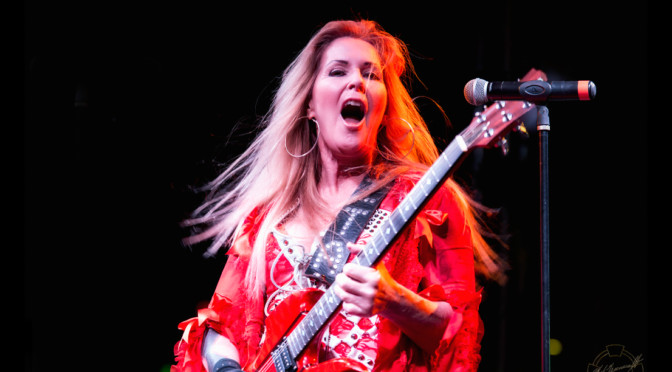 Scottsdale, Ariz. — Lita Ford and her band performed their last show of 2017 in Scottsdale at BLK Live on Saturday, December 16. Closing out the night after two opening acts, Dead West and Shadow and the Thrill.

Ford still has it, because she never lost it.

Dressed to impress and complement her polished red guitar, Ford took the stage like a rock and roll queen of hearts in her silver studded, red and white ensemble. Ford sported a red velour coat with ruffled bell sleeves and a glorious train. Underneath was a red and white bustier with studs and matching flare jeans. The ruffles and bows were a gorgeous juxtaposition to her aggressively shredding metal guitar riffs in her opening song, “Gotta Let Go.”

Ford and her band followed with songs; “Larger Than Life,” “Relentless,” “Living like a Runaway,” “The Bitch is Back” (written by Sir Elton John and Bernie Taupin), “Hungry for Your Sex,” and “Play with Fire” from her Dangerous Curves

To amp up the energy on stage, Ford invited Micki Free, a friend of Ford’s since age 18, onstage to play guest guitar for “Can’t Catch Me”, a song co-written by the late Lemmy Kilmister from Motörhead. During this song, Ford’s drummer, Bobby Rock, relished being the center of attention; pausing to take a video of the crowd, and take a selfie from the stage during his drum solo. Bass player Marty O’Brien and lead guitarist Patrick Kennison, not wanting to be outdone, stood back-to-back playing their instruments above their heads.

Ford followed up the intensity that was “Can’t Catch Me” with two slower-paced metal ballads, “Falling In and Out of Love,” co-written by Nikki Six of Mötley Crüe, and the somberly romantic “If I Close My Eyes Forever,” originally performed by Ozzy Osbourne, in which Kennison performed in his stead.

To bring the energy back, Ford played the title track “Out for Blood” off her first album

. This album was her first release after The Runaways disbanded, and the song speaks to how Ford’s personal style developed in the 80s glam metal scene.

Ford went out with a bang, playing two great hits, “Cherry Bomb” on the original guitar she used when performing with The Runaways; and “Kiss Me Deadly” off her 1988 album Lita

Opening bands were Dead West and Shadow and the Thrill. Both acts complemented the musical style and energy of Ford’s performance.

Dead West is an Arizona local band formed in 2014 that performs in a mash-up style of what can only be described as cowboy metal and blues-rock. They played a lineup of original songs, and debut their newest song “Helldorado!”

Shadow and the Thrill played original songs with a mix of classic to modern covers such as “House of the Rising Sun” by The Animals and “Crazy” by Cee Lo Green. Their sound is a mash-up of blues, metal, and classic rock.

The lead singer, Tony Cardenas-Montana, has roots in Arizona. He talked fondly of visiting his grandparents who resided in Bisbee. He then played his original song, “Tombstone Shuffle” as homage to the Wild West town he would visit as a child.

All three bands performed a high-energy show from start to finish. Ford said she plans to perform another show in Arizona come 2018. No dates have been announced, but our guess is she will be back sooner rather than later!