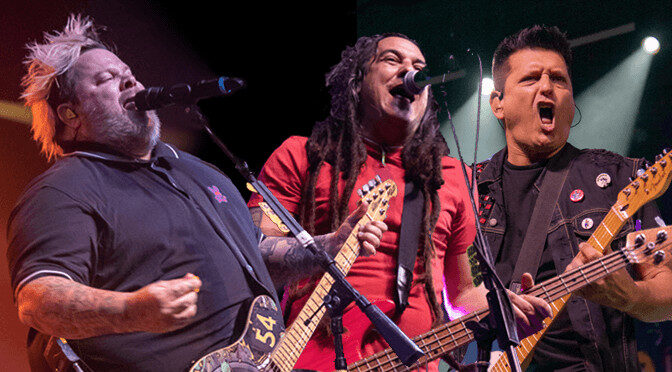 Tempe, AZ – Co-headliners Less Than Jake and Bowling For Soup stopped at the Marquee Theatre in Tempe for the second to last show before a break in their “Back From The Attack” tour, which will resume on September 2nd in San Diego. This tour was a long time coming: Less Than Jake and Bowling For Soup had briefly toured together in 2019, and have appeared at multiple festivals together, but they had never jointly embarked on a major, cross-country tour. According to Bowling for Soup lead vocalist Jaret Reddick, there were discussions of a tour before the world shut down for COVID-19, but it did not solidify until after society began to open up again. Joining the two long-time, legendary punk bands on this stop were CLIFFDIVER, a Tulsa, Oklahoma band who have dubbed their own sub-genre: elevator emo pop. Rounding out the bill was Doll Skin, a punk-rock band from Phoenix, Arizona.

As the doors to the Marquee opened, relieving fans from the sweltering mid-summer heat, they were greeted by a table operated by staff from Punk Rock Saves Lives. Reddick is the chairman of the advisory committee, and is a major advocate of mental health. The group helps connect people who need mental health services to the right resources. They also help sign up potential bone marrow donors as well. Mental health was a bit of a theme throughout the night.

Doll Skin took the stage at 7 p.m.  and opened with the chords of “Don’t Cross My Path,” from their 2019 album Love Is Dead and We Killed Her. If you heard the first few notes, you would be excused for thinking that this was a bit of a slow song, showcasing the smooth voice of lead vocalist Sydney Dolezal. The song, however, builds up and then explodes in the second verse, immediately electrifying the atmosphere and waking up even the sleepiest member of the audience.

During a break between songs – while drummer Scoot and guitarist Tori switched places, giving bassist Tay a bit of a break as well – Dolezal introduced themself to the crowd, saying that they had come to their first show at the Marquee when they were 12. After finishing a cover of Fugazi’s “Waiting Room,” Dolezal thanked the crowd for their participation, stating there would be more, but they wanted to say something before the show moved on:

“This state, my home state, has a fucking governor who’s a douche. *chuckles* Duceeyyyyy. I think my existence as a trans person, and a queer person, should not be inherently political and inherently divisive. I’m going to be fucking mad about it until I can exist, and the younger, queer people that are coming out to me and came before me can exist and live their lives.”

They finished by expressing their love for the community and dedicated “Eat Shit” to the people who prevent others from living their lives. The set was short – only 7 songs – but every aspect was memorable, from the impassioned speech Dolezal gave, to Dolezal jumping off stage during “Control Freak” and joining the mosh pit, while singing the entire time. As the band left the stage, Dolezal led the enthusiastic crowd in chants of “Doll Skin!” before wishing everyone goodnight.

This year has marked a lot of firsts for CLIFFDIVER. One is their debut album, Exercise Your Demons and another was experiencing the ridiculous heat that comes with an Arizona summer. Conversely, this is the first time that Arizona has been exposed to this lively emo band. The band is made up of co-lead vocalists Briana Wright and Joey Duffy, bassist Tyler Rogers, saxophonist Dony Nickles, guitarist/back-up vocalists Matt Ehler and Gilbert Erickson, and drummer Eliot Cooper.

While their song titles may catch your attention first –  “Not All Those Who Wander Are Lost but Can Anyone Help Me Get Out of This IKEA?” seemed to be one of the crowd favorites – the sheer amount of talent these 7 possess should hold your focus. Wright and Duffy combined for a jaw dropping cover of Creed’s “Arms Wide Open” and “Higher” mid-set, much to the delight of those witnessing.

The music of CLIFFDIVER is a beautiful mix of open, honest, and devastating lyrics, set to music that makes you want to dance and yet make you think that you should call your therapist tomorrow morning. Between songs, the pair spoke about various topics, with Duffy discussing his bi-polar disorder and his sobriety, which recently reached 14 months. As the band and the crowd fed off each other’s energy, it was quite apparent that CLIFFDIVER was an experience, and that everyone involved would leave the Marquee just a bit better for having been there.

Less Than Jake started life as a band 30 years ago, and hasn’t slowed down since. Starting the show off with 1996’s “Automatic,” Less Than Jake made it very clear that they were in town to give everyone one hell of a show. Indefatigable frontman and guitarist Chris DeMakes is a fast-talking, fun-loving ska-punk legend who – along with the rest of the band – has a single-minded desire to make sure you leave the building feeling like you had one of the best nights of your life. The band is rounded out by co-lead vocalist and bassist Roger Lima, trombonist Buddy Schaub, saxophonist JR Wasilewski, and drummer Matt Yonker.

There was a sort of controlled chaos that erupted from the stage, where DeMakes and Lima – with the rest of the band joining in at various points – interacted with the crowd between songs, bantering with the crowd and with each other. DeMakes gleefully reminded everyone who was over 35 that it would indeed hurt in the morning, an observation that resulted in knowing nods from those who have long since left that milestone behind, and cheers from those who were much closer to that age and likely did not realize what lay ahead for them. Less Than Jake made sure that there would be plenty of opportunities to feel it in the morning, mixing up the old with the new, even pulling an older, lesser played song out – 1996’s “Rock-N-Roll Pizzeria” from their album Losing Streak – and throwing it into the mix with “Lie To Me,” from their newest album Silver Linings. There was a bit of something for everyone, and for every age as well.

At one point, DeMakes pulled two younger kids onto the stage as well as one of the fans who was fanning herself, because as he said “you’re using more energy fanning yourself,” and asked Nick – their roadie – to fan her. Nick did so for the start of “History of a Boring Town,” which DeMakes dedicated to Flagstaff, which is a fair assessment of said town. Another new song was “The High Cost of Low Living,” a song DeMakes promised would be a banger. It is indeed, and it featured the return – albeit short lived – of their 90s mascot Skullman, who disappeared as quickly as he showed up. It’s never easy saying goodbye to a band like Less Than Jake, but there is no doubt they will return soon, as they expressed their love for Tempe and their fans.

Bowling For Soup set is a bit unorthodox: They played 11 songs, and they spoke to the audience for about the same amount of time as they sang. Where Less Than Jake has mastered controlling the flow of energy in the building with their in between songs chats, Bowling For Soup has mastered the art of turning a set into equal parts comedy and music. Both methods work, and work well, but expecting Bowling For Soup to follow the stereotypical punk-rock structure would be to ignore most of their body of work. After all, Reddick is far more than just the lead vocalist; he is the voice of Chuck E Cheese, the chairman of the advisory committee for Punk Rock Saves Lives, and a country music artist. Is it not punk to defy expectations, even if those expectations are that the show – and the band – will be closer to what one considers traditional punk?

Nothing about the band and the music they play – brilliantly – is within the conventional norms, and that makes their show all that much more fun. Reddick is joined onstage by guitarist Chris Burney, drummer Gary Wiseman, and Rob Felicetti on bass – all three performing back-up vocal duties as well. Favorites like “Punk Rock 101” and “1985” were played between a dad joke contest – won by Wiseman with “There were two windmills on a windmill farm, and on this particular day there was no wind. One windmill, trying to start a conversation, asked the other what kind of music they listened to. The second windmill replied ‘You know what? I’m a huge metal fan.’” – and a magic show where Reddick made a “bird” (read: his middle finger) appear from Burney’s kilt.

In addition, there was a rain of guitar picks from both Reddick and Burney, so much so that their roadie had to make multiple trips just to refill the microphone stand holding their picks. A few of those picks were even flicked at the photographers in the pit, who Reddick jokingly called the paparazzi.

Bowling For Soup released a new album this year called Pop Drunk Snot Bread, which was reportedly first intended to be a recording session to make a few singles, but in the end the band decided to make it an album to spend even more time together. Unsurprisingly, the songs off this new album are fantastic, and the band treated the crowd to one: “I Wanna Be Brad Pitt,” a song about, and this may be a bit surprising, Brad Pitt. The music video is predictably hilarious, and watching it live is a treat unto itself. Reddick discussed mental health as well, sharing a bit about his own struggles over the years and what Punk Rock Saves Lives means to him and what it does for the community.

Punk is often thought of as a music genre, when in reality it is, or has become, a culture and community with some really good music that comes along for the ride. The flier handed out at the table had a quote on it from Joe Strummer: “Punk Rock means exemplary manners to your fellow human beings.” This, without a doubt, is a statement that all four of the bands lived up to on this night, and during every show.