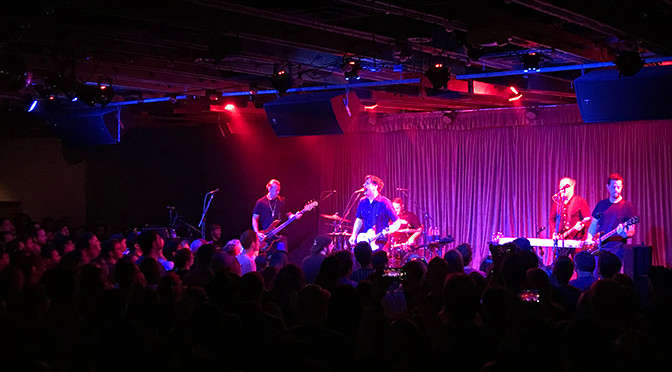 PHOENIX — Jimmy Eat World announced on Twitter, Facebook and Instagram on October 1, 2019 that they would be playing a hometown show at Crescent Ballroom in support of their 10th and newest studio album “Surviving”, which will be released a couple of weeks later on October 18th. The tickets went on sale at the same time the show was announced, and those lucky enough to be on social media at that time managed to snag a ticket or two to what would turn out to be one of the most incredible shows the valley would see in 2019. The opener was Gabriel Sullivan, a Tucson native who also was playing in support of a new album, his 4th: Black Crow, released on September 27th this year.

Crescent Ballroom in Downtown Phoenix was less than half full when Sullivan took the stage, his band playing a nearly ethereal opening few notes with the stage bathed in blue light before he bounded onto the stage. Gabriel has a passing resemblance to a younger Eddie Money, his low, growling voice reminiscent of Nick Cave, with a sound that would be at home in a Quentin Tarantino movie. He is, in short, what one would think of if someone mentioned music that sounded like the desert.

By the time the final note had played, he had the crowd’s rapt attention and had many heads bobbing along to the music. Mid show, he raised a can and talked about how incredible it was to open “for your hometown heroes, Jimmy Eat World!” He also made mention of Casey Golden, who had played in the lounge before the show and told everyone to grab the record of a fellow Tucson native.

As the stage was prepared for Jimmy Eat World, the anticipation in the crowd built, with a near electric feeling prevalent in the room. Finally, the time came for the band to take the stage, with frontman Jim Adkins wasting no time in starting the show: “Howdy y’all! We’re Jimmy Eat World from Mesa, and this is Surviving!”. The title track off of the upcoming record had a retro sound and yet was brand new. This was the magic of the evening; 21 songs, some new, some old, all sounding timeless and explosive.

Jimmy Eat World just reached 25 years as a band, a milestone that is no small feat, and in that quarter of a century of existence they have released nine records with Surviving being the tenth. To say that they have released some incredible songs over those years would be an understatement, and many songs have resonated with fans in various stages of life. To that end, as past hits such as “Pain”, “Sweetness” and “The Middle” played, Adkins’ face would light up as the fans sang every single word back to him, matching his passion and his energy. Very little time was spent talking to the audience, but every word he said was full of gratitude. Repeatedly, he would wait until the applause died down and would say, “Thank you so much!” At one point, while wiping sweat off his face, he told the audience, “you guys are fantastic. It’s just better when we have our fans.”

Seven of the songs on the expansive setlist were from Surviving. “All The Way (Stay)” and “Love Never” were already familiar to much of the audience, as they were singles that were released when the album was announced on September 23rd. Others, like “Surviving”, “Criminal Energy” and “555” were new and well-received, with the latter two being heavy, and yet soaring songs, a sound that has traces of “Integrity Blues” and traces of the time Justin Meldal-Johnsen, who produced the album, spent with Nine Inch Nails.

Jimmy Eat World has played many venues all over the world, from the majestic Red Rocks in Colorado, to the enormous music festivals such as Kaaboo Del Mar in San Diego and the massive Rock am Ring in Germany. They can, and do, sell out massive amphitheaters, and yet they appear to still be in awe when they return to their hometown and play a concert in a cozy venue such as the Crescent Ballroom.

The respect they have for the fans could be witnessed multiple times throughout the night. After “Bleed American” Jim asked the audience to give themselves a hand because “That was really cool!”. Later on he would thank the Crescent Ballroom for allowing them to play, and announced, “We’ll be on Jimmy Kimmel next Thursday! Is it Thursday? It might be Thursday.” As the last notes of “The Middle” were still fading away, members of the band shook the hands of the fans in the front of the stage, gave some high fives, and thanked everyone for coming out again.

One of the coolest parts of the night did not happen on stage. Rather, it happened by the merch booth, where Adkins stood and took pictures and talked to fans up until the point Gabriel Sullivan took the stage. Jimmy Eat World came from a Phoenix music scene that was rough in the 90s, and rose to the top of the nationwide charts. However, as this show proved, they have not and will never forget their roots. This show was a love letter of sorts, a thank you to the fans in their hometown.

There will be a Surviving listening event on October 18, with a Zia Records/Jimmy Eat World pop-up shop, while DJ Chelsey Louise (of Fairy Bones) spins emo classics at Arizona Wilderness. Don’t miss it!

It’s finally here. Can’t wait for you guys to give this a spin. #Surviving #vinyl https://smarturl.it/Surviving