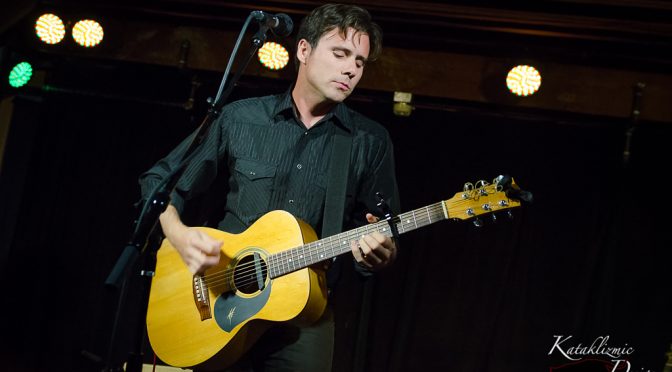 Phoenix, Ariz. – Jim Adkins, lead singer of Jimmy Eat World, returned home to Arizona last night, bringing his  super chill “dude-with-a-guitar” gig to Valley Bar. The show sold out at least a month in advance, which is no surprise considering the success of the band he fronts, the success of his recent European tour,  and the special place he holds in the hearts of those in his hometown.

A refreshing deviation from the norm, the show unexpectedly opened with stand up from Anwar Newton instead of an opening band. Recruited by Adkins, he loosened up the crowd before it was going to “get emo”. Newton succeeded in garnering laughter from the audience with off-color humor about topics like self-righteous coworkers, a carjacker who couldn’t drive manual,  separation of food and politics, and paying taxes versus giving blowjobs (in his opinion… there’s no question, BJs FTW). For those that came to see Adkins, this was an engaging act, and time passed quickly before Adkins took the stage. It was unique that, as the headliner, he was the second act of the night with more bands following.

As emotional as Adkins’ music is, he brought a very lighthearted, slightly goofy stage presence to Valley Bar. He was excited to be playing at Valley Bar for the first time! Despite 23 years in Jimmy Eat World, he is arguably the least pretentious major musician you could ever meet. Adkins effortlessly tapped into the vulnerable emotions of his music, while still interjecting his quirky sense of humor between songs. One moment he was singing heart-wrenching lyrics like, “Are we too damaged now to possibly connect?”, and the next, he was joking about learning Slayer songs to play upon request.

For the set, Adkins played songs from his “I Will Go” EP, as well as select J.E.W. songs and covers. Without falter, his vocals delivered exactly what you would expect from listening to his records, with the only noticeable difference being intentional changes to the melody for the performance. Adkins’ guitar is like an extension of himself, which lends itself to his ability to fully invest in the nuances of his vocal performance. He is a seasoned musician with the ability to genuinely connect with his adoring audience on the same level.

For some solo projects, such as Nate Ruess and The Band Romantic or Amanda Palmer and The Grand Theft Orchestra, the artist performs with a full live band. For Adkins’ solo endeavors, he may be only one man with an acoustic guitar on a big empty stage, but these humble, low-key vibes are exactly what he goes for.

In a 2015 interview, Adkins told Substream Magazine that, “…planning out an encore makes me feel like an asshole.” So it was unsurprising that when Adkins exited the stage, that was the end of his set. He loaded up his equipment himself afterward, which he joked is what rock ‘n roll really is. Some in the crowd were overheard asking, “Why is he carrying out his stuff himself?”

Jim Adkins is a totally normal guy who happens to be a world-famous musician, and Arizona is proud to call him our own.