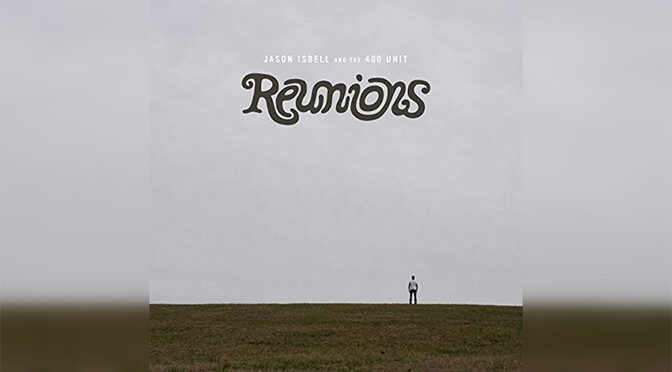 My history with the music of Jason Isbell is long by most standards, dating back now seventeen years since he was the “new kid” in the Drive-By Truckers, almost like a hired gun as the band’s third guitarist, during their brilliant trio of albums: Decoration Day, The Dirty South, and A Blessing and a Curse. Isbell seemed like the band’s little brother at the time, and yet his songs easily stood toe-to-toe with those from bandmates Patterson Hood and Mike Cooley, with standout tracks like title track “Decoration Day,” “Goddamn Lonely Love” from The Dirty South, and the outtake “TVA” from those sessions.

As good as he was when he was younger, he has managed, since going solo, to continue to push himself more and more with each album, effortlessly stretching creatively to one-up himself across three proper solo albums and now four albums with his backing band The 400 Unit. Through those seven post-Truckers records, he has solidified his position as one of our greatest-living songwriters, an assertion he might deny but one with which his legion of fans would certainly agree.

On his new album Reunions, Isbell, a dyed-in-the-wool Alabaman whose early albums were steeped in the Southern rock tradition, has taken on a sound that is more Americana than Southern. The America that Isbell explores is one haunted by ghosts and populated by characters wanting nothing more than to move forward in so many ways in their lives, but while struggling with pasts often complicated; wrapped tightly in both warm memories and regrets of mistakes they made but can’t quite shake or forgive themselves for. In fact, on the album’s opening track, “What’ve I Done to Help,” Isbell laments a life of mistakes; questioning with the title if he’s made any effort to make his situation better, and revealing that in fact, he’s only made it worse; a sentiment many of us can relate to when we are haunted by the ghosts of regret in our minds.

The emotional toil of the first song gives way to its counterbalance: “Dreamsicle.” Isbell spent his childhood in Alabama, as I spent mine in Missouri, separated by some-odd 600 miles, but joined by those moments spent outside in a folding chair enjoying a sweet, cold treat. However, the song’s nostalgia for the innocence of childhood spent outside in the twinkling twilight of childhood summer nights is shadowed with the foreboding of a sadness not fully realized, but one that is still ever-present.

By his own admission, Isbell was first able to write songs for a character that was not him or based upon a story he knew with “Elephant” from 2013’s Southeastern. “Only Children” is one such song, as the protagonist revisits his home town and is reminded of a friend lost. Even among those good memories, though, are moments tinged with a sadness; moments of more questions than answers, hinting at a story with an ending that is unknown and tragic as a result. Even the solo towards the end of the song feels like tears on a guitar.

Side two kicks off with “Running With Our Eyes Closed,” a track that would not have been out of place on an early Heartbreakers album, as you can close your eyes and for a moment imagine Tom Petty taking that lead vocal. As Isbell sings of a romance that at any moment seems in danger of going completely off the rails but manages to continue on, he lets loose with a bluesy guitar riff unlike anything he’s attempted before and yet nailed with aplomb.

The album’s next two tracks —  “The River” and “Be Afraid” — feel like a one-two punch. On the gentle, gorgeous “The River,” Isbell finds spirituality, baptism, and forgiveness on the titular river, as if he has been washed of the sins of his past and is ready for a rebirth. That rebirth is realized on “Be Afraid,” as he implores the listener to be afraid and “do it anyway,” meaning of course for each of us to challenge ourselves to go after the “thing,” whatever it may be in our lives that we want more than anything but let fear keep us from. Just as Isbell got on stage and played his songs for the first time, no doubt with a fear eating at his gut but with a headstrong perseverance that allowed him to do it and make an incredible career out of, he is imploring his listener to do the same: to go after the thing they want to do but are too afraid to try. Maybe this, more than anything, is the album’s central message: the world is screwed up, scary, and unforgiving, so why not just go for the thing that will fill up our souls with purpose and joy?

Part of our individual quests for self-improvement and a life better spent means being less reckless and more aware of our weaknesses and immortality. Isbell, sober since 2012, writes of the everyday struggles with sobriety on “It Gets Easier,” but the song is no downer that wallows in the mistakes of the past or laments the desire to drink; instead it is a song of hope, meant to cheer on those battling the temptation to let them know, in fact, that it does get easier with each passing day.

Somewhere along the way in my life, I read that if you’re a songwriter worth his or her salt and have a child, and you don’t write a song for that child, then you need to turn in your guitar and take on another profession. Isbell closes the album with the plaintive, beautiful “Letting You Go,” written about a father who loves his child so dearly, has cherished every moment, and knows that someday he will need to let that child go out into the world. One can imagine Isbell, with his guitar in his hands and his daughter with his wife, musician Amanda Shires, in his sight struggling with that same knowledge.

It’s fitting that the album opens with songs about the ghosts that haunt each of us: those mistakes we can’t erase and the pain we’ve caused others, but slowly builds to a redemption found in rivers, bravery, sobriety, and the love of family. While this redemption belongs to Isbell, perhaps there is inspiration to be found for the listener to let go of the pain of the past, start forgiving ourselves, and embrace the joy and beauty in our own lives. The America that Isbell wrote this album in is not the America we see today. It’s an album where he chases ghosts of the past; real, imagined, fictional, or nonfictional, but we’re all chasing ghosts right now in this new America. So if you’re chasing ghosts, then why not this tour of his America? Because it’s the America we’re all living in, haunted and filled with regret for the mistakes we can’t change and the present and future we’re all accepting as a result.