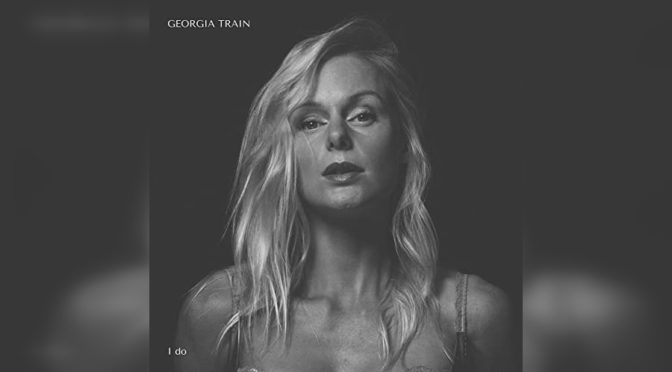 About a decade ago, I was first introduced to Georgia Train as part of a two-piece band named Bitter Ruin. From the moment of first hearing the track that introduced me to them on Myspace, “Trust”, their dramatic music had the ability to connect with my mental and emotional state. Released on May 1, her 10-track solo album I do is no exception, as it resonates deeply on personal levels.

(Please check Bitter Ruin out.
They are mind-blowing and deserve all of the love in the world. )

I have developed many of my own website projects over the years that never quite took off, and one of them was a alternative/goth fashion and feminist website called Mistress Ravine – which I created in my early 20s. On that site, I had an Advice & Opinion blog that I intended to help educate young women, and put a spotlight on artists that I felt deserved recognition. For that blog, I wrote an album review for Bitter Ruin, and it’s funny to think back and wonder how much of my track-by-track dissection of Hung, Drawn, and Quartered may have possibly missed the mark when it came to interpreting the songs. It is, of course, a given that listeners will always apply their own understanding from their unique realities to tracks, yet I have thought back on it over the years a bit self-critically. Listening to Train’s commentary after having already listened to I do about seven times since its release, it is fascinating to learn the true meaning and the headspace behind the songs — it’s so much more intricate than what I tend to assume… so much more potent.

While in quarantine, Train produced this album herself, regarding which she comes across as humble and intentional in her commentary. Her solo work differs from Bitter Ruin’s past work in that it is less theatrical, or to use a word from her commentary, flamboyant. To be forthcoming, I wasn’t sure whether I would connect with the album in the same way as their past work when I heard teaser clips. However, the maturity and sophistication of I do do parallel my evolution and speak to me. The album having been recorded at home and serving as an introspection on love and marriage, it is a uniquely authentic, raw listen. However, do not go into this album expecting a series of mere love songs.

I do is, to me, an album of healing and acceptance. When we fight “to the death” to make a relationship work, it’s as if we stick our fingers in our ears, unfold our blinders, and charge forward. We feel righteous, we feel we are doing a good thing, the loving thing, and yet in actuality, we may be more doing harm than good. That is one of the most difficult things we can ever face. Sometimes, music is the key to revealing the truth, to waking us up. Sometimes we need a song to give us a poignant message (or more bluntly, hit us over the head with it) that compels us to simply utter a self-aware “ouch.”

Train, who is known — with no exaggeration — for her vocal acrobatics (a bit trite, but such an apt phrase), also has an impressive vocal range. You will catch her voice flying high, as well as dipping deep, throughout the album. Often, she flutters around in a falsetto, though any old Bitter Ruin fan knows how she can belt that chest voice (a favorite example being “Leather for Hell” — a unique rock song for Bitter Ruin). Her graceful singing on I do is a perfect fit for the very private conversation she is having through her music.

That is not to suggest that the album lacks intensity — to the contrary, my favorite track from the album, titled “Pressure”, crescendos and inspires heartache.

“Did I put too much pressure on you to be the one I can lean on?
Maybe I was wrong to”

The following track, “Shatter”, paints a picture of the unintentional self-harm we participate in out of desperation to repair a broken relationship. The song is a twisted knife in the heart of anyone that has been in this situation, yet serves as commiseration.

“On my knees finding pieces of the shatter,
these tiny cuts don’t matter
Work all night just to put us back together,
I swear I’ll make us better”

“Marry This” is a unique, nuanced track that addresses the way people that commit to each other inevitably change — a topic I have yet to see Disney tackle.

The most beautiful song on the album is, in my opinion, “White Snow”. In the commentary, it was very interesting to hear who she states influenced the track. (Speaking of Disney, I can imagine Frozen’s Elsa singing this song. Though, with all due respect, this song is meant for Georgia Train, not Idina Menzel.)

“Unholy”, with a gospel style chord progression, has the perfect sound for the closing track. If you listen to the commentary, it is mind-blowing how quickly it was written and recorded. It is the only track on the album that addresses sexuality, but as an intellectual study of sexuality — something I have never heard in a song before. Within the Gregorian chanting, she sings in a language which I was trying to pinpoint as either Italian or Latin, and it turned out to be neither. Find out what it is in the commentary.

I do is an album for listeners who like music to draw out their emotions. It is for those who like to ruminate on their relationships, or to analyze the psychology of love and behavior. (Ok, so, it’s made for me.) It fluctuates between grief, regret, desperation, ambiguity, fear, and hope. It is unlike any other I have heard, and I am very grateful it is in my life now.

Among many things, the album is about musing on what has transpired in relationships, the uncomfortable truths about relationships we do not often hear in pop culture, struggling to understand, confronting tough realities, and coming to terms. Over the commentary, Train explains how some of her personal experiences inspired certain tracks, how songs evolved, her intentions and stylistic choices, how she reclaimed some of her music, and so much more. The commentary makes the album feel that much more whole, and I think it’s especially significant to include with a quarantine release. I absolutely support the idea of the commentary for future releases.

I highly recommend not only purchasing the version of the album with the commentary on Bandcamp, but for just a bit more, support Georgia Train by purchasing her full digital discography. Either way, you can get it here.

A Message from Georgia Train