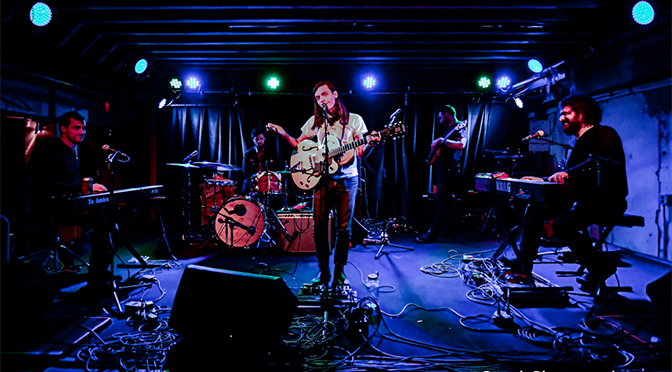 PHOENIX — In the middle of downtown Phoenix is a nondescript alley with a door halfway down it. Over that door is a neon sign with the words “Valley Bar” spelled out. It casts a stark and yet warm glow into the alley. It is not an easy venue to find, but it is absolutely worth the trek if you’re looking for great music. For this particular event, Heather Woods Broderick and The Building was playing on a Wednesday night.

The Building is fronted by Anthony LaMarca, a talented and accomplished music veteran. He is currently the guitarist for the band The War on Drugs, and has played drums for St. Vincent on tour. He also has his own record label, named Primary Records. Broderick has toured with Sharon Van Etten as part of her backing band and has also played in bands such as Horse Feathers. To be able to see musicians as talented as these two in a venue as intimate as the Valley Bar is indeed a treat.

By the time the show started just after 8:00pm, the entire audience had shown up. There were fewer than 20 people in attendance — likely due to a somewhat hard to find venue and a midweek show. For those of us fortunate enough to be in attendance, we were treated to a downright solid show.

Broderick took the stage first with Andrew Carlson on the bass guitar, and Dean Anshutz on the drums. Carlson and Anshutz would be on stage for most of the evening, since they play in The Building as well. Broderick started with an acoustic guitar. Her fingers flew across the strings as a nearly ethereal sound came from the guitar — a sound that would be present for much of the evening. Her otherworldly vocals are enough to find your mouth agape. There is a beauty in the melancholic, enthralling tone of Broderick’s music.

While most of the songs are slower, she turned up the tempo with “Quicksand” from the album Invitation, which is a song that is rather drum heavy and a very nice change of pace. Anshutz was a joy to watch during the show because of his precision on the drums and how much he gets into it, but he was even more so during this song. Broderick also played “I Try” and ended the show on “Invitation”. With the voice of an angel and impressive control, Broderick yodeled through the closing notes of the final song, which is a delight that can only be experienced live since these fluctuations are not heard on the studio recording of the song.

Mid-show, she mentioned that she was surprised at how warm it still was outside and what there was to do in downtown Phoenix. Later on, she also spoke about touring with The Building, and said “They’re very sweet people and I love hearing them play their stuff every night.” It was also mentioned that there was a week and a half left in the tour.

The Building took the stage shortly after 9:00pm, and LaMarca greeted the audience with “We’re called The Building, we’re from Youngstown Ohio, thanks for being here!” and launched into the first song. He seemed to forget the lyrics after the first line of the song, but instead of powering through and going to the next line, he stopped the song and cracked a joke about the mistake. He noted that it was better to acknowledge the mistake and fix it, saying “It’s like when you go to a sandwich shop and you order turkey on a sandwich but instead they give you fish and it’s just not as good.” The song was restarted, and the night was back on track.

There is a bit of a wistful feeling to these songs, perhaps owing to the fact that the drums were rarely used throughout the set. Watching Carlson play the bass grants a new appreciation for how precise each note needs to be. There is also a mellowness to the songs that feels a bit like quiet reflections in musical form. The soothing mood of the music would pair well with The Paper Kites on a relaxation playlist.

Midway through the show, LaMarca stopped to chat with the audience. He noted that this was their first time in Phoenix and then asked if anyone had any dogs. Surprisingly, only one person indicated she did, and they had a conversation about the three dogs she owned. The latest album is named after LaMarca’s dog Petra, a German shepherd. There is a story on their website about the name of the record and his dog Petra, and it is one we highly recommend reading.

As the night drew to a close, LaMarca announced the final song as “Peace’s Eternal Truth Renews All,” or “PETRA”. Each of the songs off of the latest album are quite personal, as he has battled Multiple Myeloma twice in the past few years and this was written and recorded during his latest battle, but PETRA feels more personal than the others. As the last notes faded, the show ended, and the few of us fortunate enough to be there made our way up the stairs and back into the alley in downtown Phoenix. Watching LaMarca and The Building in such a small venue is not an opportunity that should be taken for granted. All members of the band are extremely talented, and as such, the music was excellent.