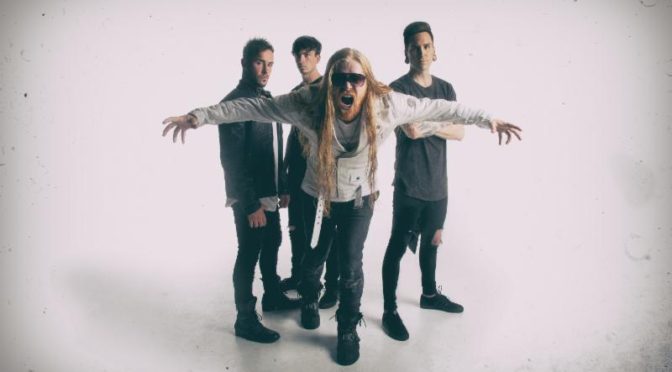 Tempe, AZ — Through Fire will be bringing their tour to the Marquee Theatre on Friday, August 2nd. They’re on the road with co-headliners Like a Storm, and special guests Wilson, and Stitched Up Heart on the “Firestorm Tour”. They will be joined by opener Hazen, an alternative metal band from Gilbert, AZ.

If you haven’t heard of Through Fire, they are a hard rock quartet created in 2015 from Omaha, Nebraska. Justin McCain is lead guitarist and songwriter, Grant Kendrick is lead vocalist, Kyle LeBlanc is bassist, and Grant Brooks is on the drums.

In under two years, Through Fire has over 20 million Spotify streams, chart-topping radio hits,  and 48 million YouTube views thanks to their debut album Breathe released by Sumerian Records. Their first single “Stronger” reached #1 on iTunes and spent an impressive 26 weeks on the charts. It was also #1 on Sirius XM Octane for 5 consecutive weeks. This placed them at #3 for the overall year following Metallica and Highly Suspect, not to mention won the band “Breakout Artist of the Year”. Their third single, “Where You Lie” soared to new heights and became #1 most added song in the country on rock radio within its first week.

Now Through Fire is ready to take their music on the road and rock out in front of their phenomenal fans!

Please tell us about your most recent release.

Kendrick: All Animal!!! It’s a beast and we are excited to unleash it!!!

What is your favorite part about being in a band? Your least favorite? Why?

Kendrick: My Favorite part of being in a band is making music! I love the feeling of completing songs that you can’t wait to share!

Discuss your relationship with your fans — how do you interact with and respond to them?

Kendrick: We love em! They bring their passion for music to the show and we enjoy hanging out with them and hearing their stories about how our songs have touched their lives!

What does it mean to you to be in your band?

Kendrick: It means you are committed, a dreamer, believer, and a fighter! We dream big and fight to make it happen! We don’t settle, we push ourselves to be better! We are blessed and grateful for all the opportunities we have and want to make the most of them!

What do you think is the glue that holds your group together?

Kendrick: Probably the music! Justin [McCain] is our leader. He is the engine, but it’s the music we all love and despite any other differences, we believe in what we are doing!

If you weren’t a musician, what do you think you’d be doing?

Kendrick: Well, I’d probably still be trying to make it to the NBA, lol

Have you ever had to deal with performance anxiety? If so, how did/do you handle it?

Kendrick: Yes, basically just pray, and suck it up till the intro music starts then it all goes away! Turns into crazy energy that you use to light up the stage! I don’t get it as much anymore, pretty much chill and just excited to get out there!

How do you maintain the same level of energy and take care of your well-being throughout the entirety of a tour?

Kendrick: I’m sober now, 18 months, so not drinking really helps! I try to drink lots of water and eat decent, but most importantly rest and warm ups! Also, coffee!

What advice do you have for artists just starting out?

Kendrick: Be patient, keep working, networking, and developing your talent. Keep working at it, neglecting your gifts are as good as destroying them. If you know you have it in you, then go out and prove it every chance you get!

Mixi of Stitched Up Heart once mentioned to me years ago that the band played more gigs in Arizona than their home state of California. What makes Arizona and appealing location for shows?

Kendrick: Well, the awesome weather, cool people!!! What more do you need! It’s always exciting to play in AZ! We have friends there we like to stop and see too when we get a chance! Shout out to the Doll Skin family! Thanks so much for the support and we look forward to seeing you soon!!!