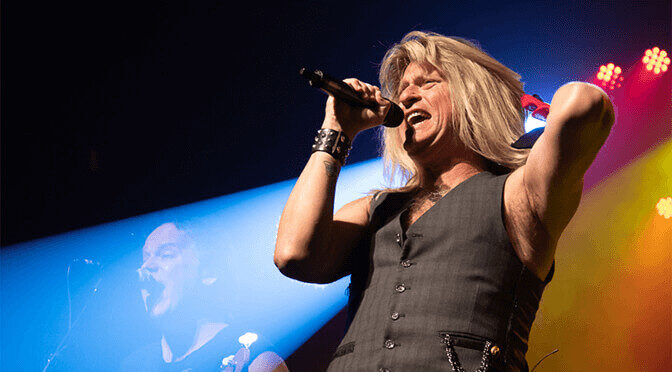 Tempe, AZ — The return of The Atomic Punks, a Van Halen endorsed Los Angeles tribute band, was a highly anticipated one. Originally scheduled for February 11 at the Marquee Theatre, the date was pushed back to February 25 due to ongoing COVID-19 issues. Clearly, the delay wasn’t a “setback”, as the band brought an evening of high energy rock. The Atomic Punks had a trio of solid opening acts bringing the 1980’s vibe back to Mill Avenue.

Kill ‘Em All, led by Kevin Hughes on vocals, opened their set with “Creeping Death”, and the high‐speed riffs continued with “The Four Horsemen” and “Master of Puppets”. The band has been performing since 2014, but Kevin Hughes is the only original member.

New lead guitarist Bobby Alexander impressed on his leads from his Dean Dimebag Dean From Hell CFH Electric Guitar and the crowd was fist‐pumping. Randy Omdahl’s solid double bass drums were hard‐hitting and paired with Ted Smith’s bass guitar and energetic hair flips, this solid opener was the perfect pick to open this show.

Tony Chavez on vocals was perfectly described by someone in the venue as “Layne Staley sings Steve Perry”. They performed their single “On My Mind” and dedicated it to drummer Billy Joe Thomas’s wife, who was celebrating her birthday that evening. The band includes lead guitarist Trent Joiner and Devin McMillion on bass guitar. Based on their unique sound and strong presence on streaming platforms like Spotify and iTunes, we’ll be looking forward to hearing more from them.

Starting their set with “Perfect Strangers” by Deep Purple was Generation HEX, a group of local musicians from various bands who combined to form a local powerhouse cover band. Vocalist Paige Mills covered songs, like Dio’s “Rainbow in the Dark” and Fleetwood Mac’s “The Chain”, with the vocal range and skill these classic songs warrant.

Norm House on keyboards is a familiar face in the local music scene, as are Eric Parker on drums, and back-up vocalist Michael Morris on bass guitar. Lead guitarist J Mark Perales never disappoints. He may be familiar as the former guitarist of the now‐defunct Desert Plains (Judas Priest tribute) but now shares his energy and talent with Generation HEX.

Formed in 1994, The Atomic Punks’ bio boasts that the band was “Voted ‘Best Tribute Band’ by LA’s ‘Rock City News’ three years in a row”, and after a couple hours of David Lee Roth era Van Halen songs one can easily agree. Opening with their namesake jam “Atomic Punk”, the high‐kicking, blonde coiffed lead vocalist Brian Gellar personified the first Van Halen lead singer both visually and with the familiar rasp of his voice. His microphone stand spinning and laced leather pants rounded out the look we remember from the earlier Van Halen videos.

Current lead guitarist Lance Turner has big shoes to fill as Eddie Van Halen and didn’t hesitate to blow us all away with his Eddie‐esque leads. Dressed in the familiar patchwork leather pants and red kerchief around his neck, he handily dealt us strong covers of Van Halen classics from his EVH signature guitar. Joe Lester, on bass guitar as Michael Anthony, grabbed attention particularly on “Mean Streets” while drummer Scott Patterson handed us double‐bass power on “Hot for Teacher”.

The Atomic Punks have been around for 28 years for a reason: They’re damn good. According to The Atomic Punks’ website, Michael Anthony was quoted as saying, “I feel like I am back in 1982 performing with the old band!”, and has even joined The Atomic Punks on stage at the House of Blues in Hollywood – playing 9 Van Halen Classics for fans. David Lee Roth mentioned them in his 1997 autobiography “Crazy from the Heat”, boasting that the band is “The best tribute to Van Halen ever!”

Eddie Van Halen may no longer be with us, but his footprint in the music industry is eternal in the hearts of his fans, and we thank The Atomic Punks for taking us back in time to our memories of Van Halen we hold so dear.