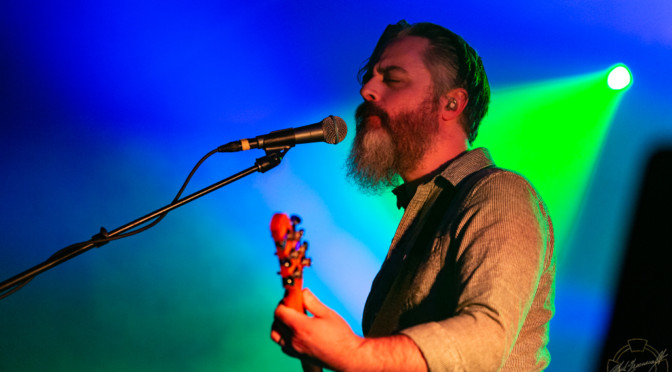 Tempe, AZ —  At face value, thinking about a period of seventeen years does seem like a long stretch of time. Contrarily, Minus the Bear frontman, Jake Snider, has a different take on the idea because about halfway through the set on their farewell tour at the Marquee Theatre last night, Snider gave the audience some insight into their seventeen year-long career as a band, “Seventeen years feels like almost no time has passed. We appreciate all of you for being here. We’ve got the best fans of anyone.”

This served as a beautiful footnote at the end of the influential band’s creative streak consisting of 6 studio albums and 12 EPs, as well as countless national and international tours. They’ve been highly influential in the math rock genre and are largely considered pioneers of the style, their beginnings predating many noteworthy math rock bands like This Town Needs Guns and Chon.

They clearly expressed their gratitude to the audience, and the feeling was undeniably mutual as the sounds of cheering and clapping rarely died down over the course of the evening. Every crowd has its black sheep though, demonstrated towards the end of the show as one inebriated concert-goer threw a full can of beer at bassist Cory Murchy. To the relief of many, the band didn’t hold the rudeness of one person against the rest of the audience as Snider calmy chimed in over the mic “Please don’t throw your f*ucking beer can at us. Thanks, we love you guys.”

The unforgettable night began with an excellent introduction of the complex music to come thanks to the opening act, Tera Melos. The Sacramento, California-based band pummelled the audience with a frenetic 40 minute set that never once let up in energy.

It all began when Nick Reinhart, the guitarist/vocalist/keyboardist of the band, gave the other members a quick, nearly imperceptible glance, and then they were off with their first song, “Don’t Say I Know”. The band continued their set without uttering a word or letting out a breath between songs while only occasionally looking at each other for brief acknowledgement of what was coming next. This was astounding because of the technicality and otherworldly sounds emanating from Reinhart’s guitar; it takes incredible musicianship to even follow what’s going on as a listener, let alone a Tera Melos band member.

Interspersed between songs were spastic, electronic guitar lines that could often be described as computer beeping in 5/4 time. Some of these sounded reminiscent of dubstep while others bordered more along EDM territory. It was surprising to many fans in attendance that it was coming from a guitar, as well as those more familiar with the band as you’d frequently hear someone new shouting “What?!” or “How?!” from around the room as Reinhart stomped on a new combination of guitar FX pedals.

Another highlight of their incredible set was “Slimed”, with Reinhart screaming “Something about my face, always makes me sick!” as the band followed along perfectly without missing a note. On these merits alone, Tera Melos is not, nor will they ever be, a band to be missed.

After fans had about 20 minutes to recover between sets from the mind blowing experience of Tera Melos, Minus the Bear picked up right where the opening act left off.

The band’s embrace of classics like “Pachuca Sunrise”, “The Fix”, and “The Game Needed Me” from their second album Menos Del Oso

scattered throughout the set among more recent favorites, such as “Last Kiss” from their final 2017 release, VOIDS

served as an anachronistic tribute to their incredible evolution as a band over time. It was a nice touch and always kept you guessing as what was to come next. The band’s sound was also finely tuned to the venue’s sound system, a huge relief considering anything less would have proven unacceptable for a band so musically polished themselves.

Guitarist Dave Knudson was a finger-tapping machine, only taking both his hands off the guitar neck to kneel down and adjust knobs on his plethora of FX pedals. If Knudson and Reinhart were to face off in a gladiator-esque guitar FX duel, it would be impossible to tell who would come out on top. Knudson and keyboardist Alex Rose were the icing on the cake of the intricately layered music, as bassist Murchy and touring drummer Joshua Sparks provided a solid backbone for the songs to breathe new life into the hearts of many listeners.

While farewell tours will always carry bittersweet connotations, this inspiring show served as a proper send-off for some of math rock’s founding fathers with the grateful support of an up-and-coming math rock band. It’s hard to picture it going any better than it did, and many fans stayed until the very end of the show, absorbing every beautiful moment. The legacy of Minus the Bear will live on through not only their own music, but in the hearts and minds of fans worldwide and other math rock bands reinventing the sound that was so new only seventeen short years ago.