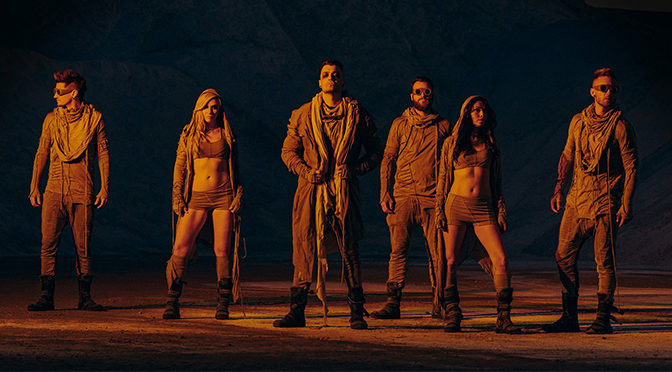 Released on September 13th, 2019, DIVISIONS is the third studio album by STARSET. Fronted by Dustin Bates, STARSET is known for their elaborate shows and their detailed, cinematic rock albums. To watch STARSET live is to watch a spectacle of light and sound that leaves you in awe. There is an augmented reality app, aptly titled STARSET, that was first meant to be used during the live concert. This has since been updated to have some functions outside of the concert setting. During the “Immersion: Part One” tour, Bates and his bandmates wore spacesuits. Bates, in fact, has a significant tie to space: he was a teacher at the International Space University Space Study Program at one point, and has solidified his image of being both an extremely imaginative and talented musician and an accomplished scientist.

DIVISIONS — set on Earth in 2049, in a dystopian future that involves mind control via an implant. Four music videos were released in the lead-up to the album release: “MANIFEST,” “WHERE THE SKIES END” “STRATOSPHERE,” and “DIVING BELL.” Watching them helps understand the story behind the album, which in turn is linked to their show.

You do not listen to Starset — you experience them.

As you travel through the journey that is DIVISIONS, you will hear more than just the songs. “WHERE THE SKIES END,” for example, is bookended by audio clips from a video called “A New Horizon” that played at the 1939 Worlds Fair in New York. The name of the exhibit was “Futurama,” and was a vision of the future – a future that came true in many ways. Ronald Reagan can be heard in “STRATOSPHERE,” taken from a speech he gave in 1987 to the UN about war, in which he said “I occasionally think how quickly our differences worldwide would vanish if we were facing a threat…From outside this world.“

The first track is only Bates speaking with synth playing, building until the end of the song. “A BRIEF HISTORY OF THE FUTURE” lays out the rest of the album:

This place is a desert for the mind
Devoid of emotion and barren of thought
No real thought, at least
It’s no surprise
Most minds here have long since atrophied from lack of use
They wait in flatline for the next rushing jolt of synthetic stimulation
The real world can’t compare, even if it were allowed to
Contemplating the real world leads to seeing the world for what it is: a prison... (Continues)

“MANIFEST” is a mix of heavy rock riff and poppy sounding choruses. It leaves you off balance a little, though it is a very enjoyable song, and it just takes a couple of listens to get used to the genre switch. It showcases the genius of Bates: as the music switches between rock and pop, the lyrics describe a love that seems to be a bit unstable:

The song ends with a cadence of crashing guitars and drums, leaving the listener with a second or two of silence to regroup a bit before the synth beginning of “ECHO”.

“Echo” is a symphonic song, soaring behind lyrics that seem to be steeped in Greek Mythology. From the mention of the Odyssey at the beginning, up to and including the lyrics:

In Greek Mythology, Echo was cursed by Hera to only be able to repeat the last words that another would speak. She met, and fell in love with Narcissus, who fell in love with himself. That ended rather poorly for both of them. The song seems to be more than just the story of Narcissus, it indeed seems to be told from the viewpoint of a narcissist:

It should be noted that the person referred to here followed the singer silently for most of the song, so the accusation of giving up early toward the end rings quite false. It is, again, a well-crafted song by Bates.

“WHERE THE SKIES END” seems to be a near defiant look at the future, a musing that is sung over music that alternates between a heavy riff and synth. The lyrics speak of the change between the current and the previous generations — one that could possibly apply to today as well:

“PERFECT MACHINE” is far more synth heavy, the music slowing down a bit, and seems to be a tragic song in some ways. In the first verse it becomes quite apparent the protagonist is not exactly the nicest person in this scenario; in fact, they sound downright manipulative:

By the end of the song, the subject seems like they have reached the point where they have acknowledged their faults and are trying to protect the other person from them.

As the outro plays, you can hear what sounds like a subway, or perhaps a bus station, and a disembodied voice in the background repeating propaganda. It is a masterful touch to remind you that this is set in a dystopian future

“TELEKINETIC” is absolutely connected to “A Brief History Of The Future”. This is a heavy, heavy song, reaching past the rock genre and going into the metal, with a scream punctuating the song. One cannot help but to be reminded of the band RED during this song. Bates weaves in a comparison of being a puppet and voodoo, and in between it all, the mention of the hit of the chemicals in the brain that popped in the first song.

Fake
I’m just a puppet in your play
You pull the strings and I obey
High, that oxytocin hit me just right there
It’s counterfeit
Zombie, zombie, could it be a hex?

As the song ends, as your ears are possibly still ringing, “STRATOSPHERE” starts. This is the first true pop rock song on the album. In the first half, the drum kick is the heaviest element of the song, unless you listen closely to the lyrics. It is indeed a beautiful, tragic song; a song of longing and missing someone that you once loved.

There is duality between “STRATOSPHERE” and “FAULTLINE,” with the latter sounding more like a sarcastic, angry song about a hurt partner pushing back against the other in the relationship:

It is such a sharp contrast in music style and lyrics that it feels out of place, and yet it will resonate with anyone who has ever gone through a rough breakup, and indeed with anyone leaving an abusive relationship.

“SOLSTICE” has a bit of a heavy sound to it, with a great beat with some EDM behind it, though it quickly becomes very repetitive. Musically it’s a great song, lyrically it leaves one wanting more. It is the least impactful song on the album, though it is still an enjoyable song musically.

“TRIALS” is, quite simply, a song of defiance — a story of looking straight into the teeth of the darkest days and triumphing. Set over a driving drumbeat, it is another song that reminds me a bit of RED and moves closer to metal and away from rock.

“WAKING UP” shares the same kind of driving drumbeat, though the message changes quite a bit. There is a near EDM feel to this song as well, and seems to be more about the message of someone throwing off the mind control device. It is truly enjoyable, though there is some repetition.

“OTHER WORLDS THAN THESE” is one of the most enjoyable songs on this album, both in music and in message. There are many concepts being explored here, one of which is a mind that has been awakened and is now contemplating the vastness of the universe, and that there may indeed be other worlds out there.

“DIVING BELL” is a beautifully juxtaposed song. It feels relaxed, but has an urgent question:

It is not often that you witness the process of living with depression and trying to push away from those who love you. It is a perfect end to one of the most well-put-together albums of 2019.

STARSET is amidst their “DIVISIONS: 2019” tour in support of this album, and unsurprisingly, the show looks just as incredible as previous tours. Finishing the U.S. leg of the tour in Newport, KY, they will be embarking on a European leg starting February 8th, 2020.

Get the album, allow your imagination to take you on the journey that STARSET has laid out before you, and then go see them live.
You will not regret it.