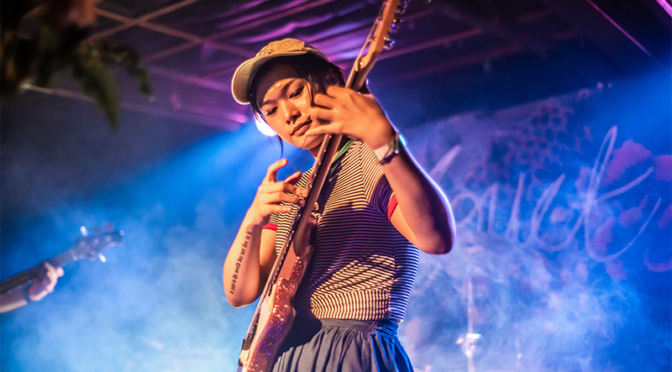 PHOENIX – Covet, touring with special guests and friends HOLY FAWN and Vasudeva, bloomed in a magnificent way at The Rebel Lounge and shared their sublime sounds during the hottest period of the unrelenting desert summer. Luckily, nobody was a pile of goo by the time the show started.

Bout time we play this here venue. See ya tonight Phoenix if we aren’t a pile of goo by then pic.twitter.com/K7qkAhgQnq

This esoteric collection of musicians was a sight to behold, sharing a fascinating mix of influences from genres such as post-rock, math rock, ambient music, alternative rock, indie rock, experimental sounds, and many more. While stage banter and lyrics may have been at a minimum, fans certainly have a lot to talk about after witnessing this stunning bouquet of musical aptitude.

Kicking off the evening was local band HOLY FAWN, self-described as “four creatures making loud heavy pretty noises.” They certainly lived up to their description, as the noises varied from gentle electric sounds to earth-shattering riffs and screams. They were also the only band of the evening to feature some vocals in their songs, but for the most part, they fit right in with a heavy focus on unique instrumentals.

HOLY FAWN began their set with some ambient music playing over a dark stage covered in laser lights. The darkness and the soothing sounds made for some great ambiance, but soon it was time to rock. Without really announcing themselves, HOLY FAWN made their way to the stage from the merch booth area — not a long walk at all in the cozy, intimate Rebel Lounge. One member said “alright, let’s do this,” as they prepared for the show.

As HOLY FAWN began to play along with the ambient music, their energy slowly rose until climaxing with some epic, loud sounds. The vocals were hard to discern in The Rebel Lounge, but the music was still enjoyable. It was all about the instruments, with some screaming thrown in every once in a while for good measure.

Vasudeva took the stage shortly after HOLY FAWN, and they brought a different sound to the room. Their approach is purely instrumental, and each band member can play their instruments brilliantly. Watching all three of them on stage is a beautiful sight, and it is clear they love playing music together. Not only is their music beautiful and enjoyable, but so is their presence on stage. Their commitment to the craft is hypnotic.

Vasudeva spent most of their time on stage rocking out and sharing their captivating sounds with the crowd, but they were sure to add a quick “thank you” after each song was over. They were also sure to throw in a few other tidbits, such as “this is dope,” “this is so cool,” and “righteous.” They were also sure to thank Covet for asking them to go on tour together. Vasudeva said, “Our friends Covet are on after us. Give it up for them! We’ve been touring with them for about a week now. Wish it was longer.”

Each member of Vasudeva was really into the music and the performance, and they finished their set with an energizing finale. While many people may have come to The Rebel Lounge to see Covet, Vasudeva certainly gave them their money’s worth. The crowd was prepped for more scintillating instrumental music, but it was clear that everyone had immensely enjoyed the show so far. Unfortunately for Vasudeva fans, merch was sparse; as they said, “we’ve been on tour for a while, so we’re running low on merch. We have 2 records left. It’s crazy.” That didn’t stop people from rushing to buy things later, though.

At long last, it was time to effloresce. Similar to how HOLY FAWN began, there was ambient music playing — a prologue to the epic odyssey that was about to commence. Covet took the stage by gentle storm, with David Adamiak coming out to join the ambient music and add some bass currents to the mix. Shortly after that, Yvette Young and Forrest Rice joined him on stage to a ton of applause.

As Covet says, they are “just 3 people making music” — this is the best way to describe their performance on stage. Rather than one person taking center stage, with the others supporting them, Covet is a group of musicians who somehow share the spotlight evenly. What could easily devolve into a discordant mix of conflicting instrumentals becomes a truly majestic melody.

Rice, the drummer, truly rocked The Rebel Lounge into oblivion. His performance was spectacular, and by the look on his face, he loved every second of it. He gave the music so much energy, and his massive smile could pierce even the darkest of sorrows. Meanwhile, Young was in the zone, hyper-focused on plucking the strings on her collection of beautiful, unique guitars. Tying it all together was Adamiak, traipsing around the stage with his bass guitar, really getting into the music and the moment.

Young has made waves in recent years with her unique style of playing the guitar, and she has also recently been featured in a few interesting articles that reveal some insights into her artistic powers. While she plays many instruments, the way she plucks the guitar strings is quite unique; the sounds this technique creates are fascinating and entrancing. Not only does this show off her sheer mastery of guitar, but her immense creativity as well. It is no wonder she has been called a true “Renaissance woman” by many.

Adamiak brought his own creative spin to the show as well. While he merrily wandered all over stage, he made sure to engage with the audience whenever possible. If he didn’t make eye contact with every single person in The Rebel Lounge, it must have been close! He also seemed to have a great time making silly faces at people, as well as jumping out at the crowd from time to time to really rock out. At the end of the show, he made sure to dispense plenty of high fives to those at the front, too! Rice ran up to join him in the high fiving at that point, so there was plenty of love to go around.

Covet had such a pleasant presence on stage and infected the entire crowd with their joy. Along with spreading the music love, they also shared some beautiful stories and useful information. They referred to HOLY FAWN and Vasudeva as their “ultra homies,” told a story about the importance of staying hydrated, and thanked the audience profusely for joining them that evening. As Adamiak said, “thanks for staying out so late with us, on a Sunday night of all nights.” He repeated similar sentiments at the end of the show.

At the end of the show, Covet performed “Howl” from their new album effloresce

, which just came out on July 13th; this song is a great way to send a crowd on their way, as it is full of phenomenal energy truly worthy of a grand finale. After, Adamiak said “you guys make us really happy” and mentioned they’d all be by the merch later if anyone wanted to say hi. However, the crowd chanted “one more song” for a brief time after they had left the stage, so the grand finale wasn’t so final after all.

They came back on stage, and Adamiak said “y’all are a bunch of sweethearts, thank you.” As he was letting his hair down, he added, “we’re gonna do one that doesn’t require hair ties.” Then, “on a very serious note,” he introduced the song “Ares” as their actual final song for the evening. While not quite as thunderous as “Howl,” it is still a superb way to end a show.

When the show was over, Covet, Vasudeva, and HOLY FAWN were all hanging around the merch area waiting to greet fans, sign merch, and say some farewells. For fans of HOLY FAWN, the farewell isn’t so long either — earlier in the show, Adamiak also added that HOLY FAWN will be having an album release at The Rebel Lounge on September 21st, so mark that one on your calendar!