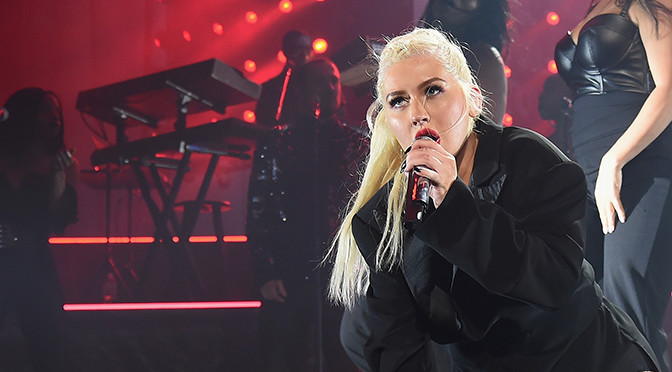 PHOENIX – Christina Aguilera brought her Liberation tour to Comerica Theatre on October 29, 2018. This is the first tour for Aguilera since her “Back to Basics” tour in 2007. The last time she had a show in Arizona was on February 28, 2007, at Jobing.com Arena in Glendale — now renamed Gila River Arena. There have been quite a few bumps for Aguilera on the Liberation tour; two dates were postponed due to illness, and one postponed due to production-related safety concerns at the venue.

Big Boi opened for Aguilera, also known as Antwan André Patton. Big Boi is an American rapper, songwriter, record producer, and actor. He’s best known for being a member of Outkast, an American hip hop duo, alongside André 3000. With Outkast, he produced six studio albums. In July 2010, Big Boi’s solo debut Sir Lucious Left Foot: The Son of Chico Dusty was released. Hip-hop didn’t seem to be everyone’s go-to genre in the audience, but there were clusters of fans that got up to dance to the beat. Toward the end of their set Patton addressed the crowd, “Welcome to the Liberation tour. Where it gets louder after every song!”

It was rumored that Aguilera was to take the stage at 9:15 pm, but that time came and went. The crowd grew restless around 10:00 pm, and some randomly cheered in hopes of making Aguilera appear, while others did the wave to keep their energy alive. Fans were talking amongst each other, concerned that Aguilera wouldn’t show at all. Seventy-five minutes passed by and the crowd booed.

Finally, “5 minutes” popped up on the screen that hid the stage. It switched to a giant face of a clock, with the hands turning counter-clockwise as it counted down the minutes. The concert began with images of Aguilera holding various timepieces. Fans stood when a video played, showing Aguilera in a red dress and a flowered crown, and a little girl wearing the same, wandering through a house as if Aguilera was chasing her past self.

The screen went black, and the word “Liberation” appeared in bold white letters. A dancer came on stage, smelling flowers and then dropping them as she danced, before suddenly running off stage. Then, the word “Searching” displayed on the screen. As the lights brightened, Aguilera stood tall on an elevated stage. The screen and background were of clouds, making Aguilera seem like she was in the sky as she sang the opening lines of “Maria” from her 2018 studio album, Liberation

Aguilera had a perfect mix of old and new songs in her setlist. The second song was “Genie in a Bottle” from her first studio album self-titled, Christina Aguilera

. That lead track from the album was a trendy pop and R&B song in 1999. It peaked atop the Billboard Hot 100, and among other charts in twenty other countries. It has sold over seven million copies, making it one of the best-selling singles in the world. During the song, images of past albums appeared on the starry background as her dancers twirled red umbrellas around her. Aguilera wore a robe reminiscent of Disney’s Mulan, from which her debut single “Reflection” came.

Throughout the show, Aguilera would have videos play before she sang her well-known songs. During the song “Dirrty”, from her 2002 studio album Stripped

, Aguilera wore a red and black leather outfit much like the assless chaps she wore in the “Dirrty” music video. On one sleeve was “2018” and on the other sleeve was “XTINA”. Her dancers wore black assless chaps as they backed her up during the song.

Aguilera finally addressed the crowd and explained why she was so late coming on stage.

“I’m here you guys. I climbed and scratched my way here. I had two planes both have mechanical failures and that’s freaking scary shit. I’m sorry. I was like ahhh, what! I was so freaking scared. So the third plane (third time is the charm), the third one came through and I was able to get here on time to be here with you guys, but I made it, I made it to the stage tonight, but it took a little longer. Lord in Heaven. That played some scary stuff on my nerves, and you know, I get some bad anxiety sometimes. That was not fun today. You know, I’m going to unleash some of that on stage tonight. Get it out of my system.”

She laughed and continued, “But it feels so good to be back here after so long and getting to be in some beautiful theaters, oh I’ve never done that before. It’s just so beautiful, so intimate, so wonderful to see you all up close, and personal. It’s just so amazing after all this time. It means so much my loyal, amazing fighters.”

She patted herself on the chest, adding, “I’m not going to cry tonight, but you guys have brought me to tears before. This love has meant so much to me. It really has, you guys. Allowed me to raise my family and be there for my kids because being a hands-on mom is important to me. But also being on this stage, because you know this has been in my life since I was seven. We got some old stuff, older stuff you might remember and we have some new stuff. So let’s see if you guys remember this one.” Aguilera then started to sing lines to “What a Girl Wants” from her self-titled album.

Aguilera sang songs from her past in order, explaining her career. After “What a Girl Wants” she moved to sing some of “Come On Over Baby (All I Want is You)” and addressed the crowd again. Aguilera said, “It’s the show I have right before Halloween too. That’s extra fun. We actually have a Halloween treat for you later. I love Halloween. It’s kinda like Christmas, so it’s insane. And I see some costumes tonight, that’s really cool. Yes. So after, umm, after ‘What a Girl Wants’ and after ‘Come On Over’ I was tired of playing by everybody else’s, you know, the label and suits’ rules, and I had things I wanted to say. It came a time when, you know, my sophomore album I wrote a record called Stripped. — Which just had its sixteenth birthday and it was a very special record for me because, you know, it was the first time I got to tell my stories, talk about some of my pain and struggles and that’s really important, you know, I think that makes the best people and sometimes builds the best character. And I thank you guys for sharing your stories with me; it really inspires me as well and there’s no shame in coming from hard places at all. It means you’re a strong person.

This next song I wrote for the album, there’s quite a few of them, but you know, about standing your ground and in face of adversity or someone says you can’t do something. This song was never a single, but sometimes those are the best ones to me. And I still get a lot of requests for this. This one, you know, no matter what people say, no matter what people tell you what you can’t do. You gotta keep doing you. This one is called ‘Keep On Singin’ My Song,’ sing along if you know it.”

During the songs “Deserve” and “Accelerate”, both from the Liberation album, Aguilera and her dancers wore S&M-styled outfits and mimed an occult-like ritual at a long table with candles that they danced on. One male dancer had on a spiked mask, and the other a pig’s head. The female dancers had different masks covering their faces. Aguilera wore a bondage headpiece that went from the top of her head and down her nose with a bejeweled black top, fishnets, and a thin black skirt. After “Deserve” a quote appeared on the back screen. It read: “‘If you’re going through hell, keep going…’ –X’cess”. During the song “Accelerate”, Aguilera introduced her dancers, who each had their own moment to showcase their skill on the table in the center of the stage.

For “Lady Marmalade” (a LaBelle song famously covered by Aguilera, P!nk, Mya, and Lil’ Kim for the Moulin Rouge! soundtrack) Aguilera wore a white coat, and her dancers matched as they circled around her with ivory fans in their hands. A video of a close-up of Aguilera in red played on the backdrop.

album, “Say Something” by Great Big World, “It’s A Man’s Man’s Man’s World” a James Brown cover, and “Fighter” from her Stripped

album. Following each video, Aguilera would change her outfit to fit the mood of the song.

After “Fighter”, the videos stopped working. Aguilera came out with a mic in hand. “Sorry,” she told the crowd. She looked behind her to her band. “Are you ready for me?” She laughed, “Sorry. I know. I’m ready for you and you’re ready for me.” The crowd cheered for her. “Thank you very much,” she said, with a big smile. “I told them to cut to a certain video and it’s not playing right now and I’m upset about it. So I’m sorry. Oh well. The show goes on and I’m here. It’s been an insane day.”

A fan in the crowd yelled “I love you” and she replied, “I love you too. That’s why I’m here, but not without some anxiety. I’m kind of a nervous flier, but it’s Halloween so it’s a special time. Thank you guys for coming out tonight. And your patience for the last ten freaking years. Thank you so much. But my soul was suffering, my soul was hurting and it sometimes takes us a while to figure it out, and I was scared of having children. ‘How am I going to juggle this?’ And also for them not to feel like they are living in my shadow and stuff like that.

Honestly, it’s been such a great experience, and to feel your love and give this to my children as an experience as well. Show them what mama does for a living and what I do for the love. It brought them into this world. Thank you so much for giving me an opportunity to get back on the stage. This is for all of you guys. For all my fighters. It’s a weird night, but whatever. So this song is appropriate.” Aguilera than started singing “Beautiful”, and fans sang along waving their hands or phones in the air.

Aguilera ended the show by bringing a fan onto the stage to share her story. The woman talked about how Aguilera inspired her to be herself and how Aguilera’s music helped when life was dark after addiction and coming out as gay. She has since found a woman who is like a mother to her and is eleven years sober. She told Aguilera that, due to the addiction, she couldn’t remember Aguilera’s concert she last attended back in 2007, and she always thanks Aguilera or adds a song lyric in her grad papers. Aguilera was clearly touched and hugged the ladies, saying, “Thank you” and “I hope you remember this concert.” The last song of the night was “Let There Be Love”. The back screens turned over and became rainbow lights, while everyone on stage danced like it was a celebration.

The concert ended just a little past midnight, with delighted but tired fans pouring out of the venue. Despite the delay, video problems, and the bass being too loud to the point of sometimes cringing in pain, most fans left happy to see Aguilera on stage after all these years. She’s a fighter and she’s a pop music legacy not to be missed.