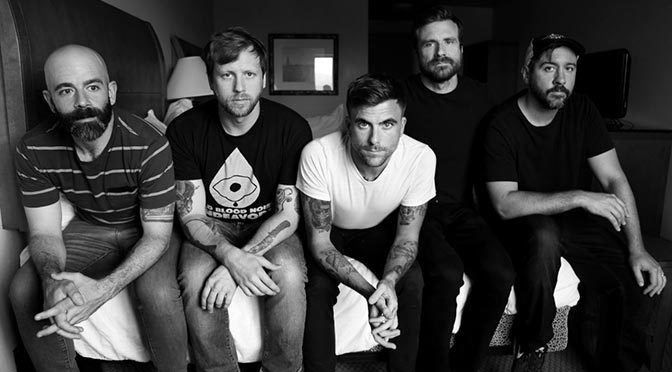 Psychedelic post-hardcore group Circa Survive will be reissuing their major label debut Blue Sky Noise on vinyl via Hopeless Records on March 20th. The album had a big debut landing on numerous Billboard charts including #1 Billboard 200, #1 Tastemakers, #3 Top Rock Albums, #11 Top Current Albums, #11 Top Album Sales, and #17 Vinyl Albums. The band will be celebrating the 10th anniversary by hitting the road with Polyphia and Gouge Away in tow on their Blue Sky Noise 10 Year Anniversary Tour that will kickoff on release day (dates below).

The limited edition commemorative vinyl reissue is an exclusive three LP set of the remastered version of Blue Sky Noise and fan favorite Appendage. This edition also includes previously unreleased demos from the Blue Sky Noise studio sessions called Appendage II. The vinyl reissue is limited to 4,000 units and features brand-new expanded packaging, triple gatefold jacket with the collection pressed on pink, yellow, and blue vinyl. Each album will include a seeded wildflower download card that is fully-plantable and biodegradable. In addition, a dollar from every album sold will be used to plant a tree through a donation to One Tree Planted. Learn more about One Tree Planted at OneTreePlanted.org. Preorders are now live and can be placed here.

Side B – Appendage II

Circa Survive emerged from the Philadelphia suburb of Doylestown and quickly made a name for themselves in the indie music scene in a little over two years with the release of their 2005 debut album Juturna and sophomore album On Letting Go, both released on Equal Vision. Their major label debut Blue Sky Noise was produced by David Bottrill (Tool, Muse, The Smashing Pumpkins), mixed by Rich Costey (Rage Against the Machine, The Mars Volta, Deftones), and released via Atlantic Records in 2010. After parting ways with Atlantic Records, the band’s fourth album Violent Waves was independently released in 2012. Their fifth album Descensus was released on Sumerian Records in 2014 and their most recent album The Amulet was released via Hopeless Records in 2017.