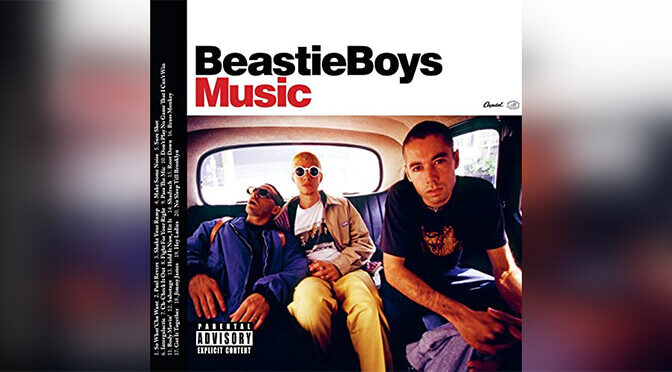 With a career dating back to 1982 with their lone release as a hardcore group, the Pollywog Stew EP, and their 1986 genre-defining hip-hop debut, Licensed to Ill, it’s hard to remember a world without the Beastie Boys. Considering the deep personal connection many of us have with them (Questlove from The Roots once said that there’s no such thing as a casual Beastie Boys fan), it feels triumphant and yet bittersweet to see the Beasties take one final career lap. Beginning with the 2018 release of their mammoth tome of a memoir Beastie Boys Book, and continuing this year with Apple TV’s Beastie Boys Story, the cycle is now complete with the release of the career-spanning Beastie Boys Music, which was released October 23rd on Universal Music Enterprises.

This is not the first compilation from the band, however, as it follows the previous releases of 1999’s Beastie Boys Anthology: The Sounds of Science and 2005’s Solid Gold Hits. What’s so different about Beastie Boys Music is the feeling of finality to it. While the future could perhaps see the release of anniversary deluxe editions of any of their landmark albums featuring B-sides and unreleased tracks or alternate takes (the 30th anniversary of Check Your Head is in two years, for instance), this still feels like the final word on a career that dates back to their early days as a New York hardcore punk band, through their years as hip-hop innovators, and finally their time as the genre’s elder statesman. With the 2012 death of Adam “MCA” Yauch from salivary cancer, we will never get “new” Beastie Boys music in the truest sense, as Adam “Adrock” Horovitz and Michael “Mike D” Diamond have vowed to never again record as Beastie Boys.

Now, the first issue to confront with any greatest hits album isn’t in reviewing the songs themselves. It’s insulting to the reader and even to the band themselves to approach a collection of their hits as if it is the first time any of us have heard the music. “You should really check out the song ‘Sabotage’ because it’s a total banger!” As with any greatest hits collection, it comes down to two main things: which songs and the sequencing.

Looking at a track-by-track breakdown of the album, it is evident that for this collection, the group opted for the singles specifically in chronological order. That is why their landmark debut Licensed to Ill (the first hip-hop album to go to #1 on the Billboards chart) is disproportionately represented, as compared to later albums, with a total of five songs appearing on the collection:

Heavily regarded by both fans and critics as one of the greatest hip-hop albums of all time, Paul’s Boutique still somehow feels like it’s underrated in their discography, as it’s sandwiched between the instant-classic Licensed to Ill and the one-two punch of Check Your Head and Ill Communication, like being the smart, sensitive middle child between the class clown and the golden child. Maybe it’s that status that makes the three tracks included from it (“Shake Your Rump,” “Hey Ladies,” and “Shadrach”) sound so fresh. They also don’t suffer from cultural saturation, as some of Licensed to Ill’s singles do. In fact, I would argue that “Shadrach” may be one of their greatest tracks on any album (check out the Nathanial Hörnblowér-directed video for it that featured live footage hand-painted by different artists to create a moving painting).

Anyone who even has a cursory knowledge of the band’s history knows that the lack of success from Paul’s Boutique left the group with a unique opportunity: to reinvent themselves free from the somewhat indifferent eye of their record label, Capitol. This led to them doing anything and everything they wanted to try, resulting in the genre-defying 1992 classic Check Your Head.

While for a band that released eight albums across 25 years, “best album” becomes a heated debate, I place myself firmly in the Check Your Head camp. It doesn’t matter how many times I’ve heard them: “Jimmy James,” “Pass the Mic,” and “So What’cha Want” still hit just as hard. The album’s “anything goes” experimentation took them to the next level. By taking up their instruments again (for the first time since their early hardcore days) and creating their own samples, they did what no hip-hop groups before them had done and only a few have sense.

If Check Your Head was the reinvention, then Ill Communication was the polished refinement of that reinvention. Two of Ill’s tracks, “Get It Together,” (featuring Tribe Called Quest’s Q-Tip guest verse), and the ode to early NYC hip-hop “Root Down”, are no brainers, but the album’s two true classics get to the essence of the Beastie’s greatness, “Sure Shot” and “Sabotage,” as they draw on the band’s two eras: hardcore punk (“Sabotage” is essentially a radio-friendly punk song) and hip-hop (“Sure Shot” has the classic pass-the-mic structure of the best of their songs).

“Sure Shot” features a verse from MCA that still sounds ahead of its time, when the late rapper dropped “I want to say a little something that’s long overdue/The disrespect to women has got to be through/To all the mothers and the sisters and the wives and friends/I want to offer my love and respect to the end,” and seemingly became the first male rapper to embrace feminism. This lyric and MCA as the group’s spiritual leader was well-highlighted in the book and documentary. At a time when a lot of rap lyrics were still leaning heavily into “bitches” and “hoes,” MCA took an important step for rap music as a whole and changed the image of a group much-maligned early for songs like “Girls” (you can Google the lyrics, if you don’t know).

Now, “Sabotage” is “Sabotage” and it will outlive us all. Heck, a joke in the rebooted Star Trek films was Captain James T. Kirk’s love of the song — considered to be an “oldie” in a distant future of routine space exploration. Fun bit of band trivia: “Sabotage” first had life as an instrumental jam inspired by MCA fiddling around on the bass and coming up with the signature bassline. The original recording had no title, and became known as “Chris Rocks” after an overly-enthusiastic studio tech named Chris lost his mind after hearing them record the demo and yelled “this shit rocks!” It lived as “Chris Rocks” until Adrock free-styled the vocals screaming his frustrations at the band’s producer Mario Caldato, resulting in the thinly-veiled but good-natured shots at Mario C, such as: So, so, so, so listen up, ’cause you can’t say nothin’/You’ll shut me down with a push of your button. Though arguments can be made for their greatest track, “Sabotage” is their most well-known song, finally dethroning “(You Gotta) Fight for Your Right (to Party)” for that title and has aged well, now 26 years since it’s original release. That is why it became and remained their set closer for the rest of their existence as a touring group.

The later half of their career, though representing three albums over a 13-year period is relegated to a total of five tracks, with two tracks from 1998’s Hello Nasty, one track from 2004’s To The 5 Boroughs, and two tracks from their 2011 swan song Hot Sauce Committee Part Two. This is the lone weakness of this compilation, as each of those albums deserves more time, but that is time that a single-set greatest hits collection simply cannot afford. Still though, it feels strange that the demands of a reasonable runtime means that Nasty’s “Three MC’s and One DJ,” Boroughs’ “Triple Trouble” or “Open Letter to NYC,” and Hot Sauce’s Nas-duet “Too Many Rappers” are unfairly left off the album. It is recognized, though, that those tracks were singles but not huge hits. Que sera, sera, I suppose.

While the dream of a Beastie Boys compilation in the same vein as the three-part Beatles Anthology series — filled with outtakes, b-sides, and demos — will hopefully be realized someday, for now we have this solid greatest hits. Though the hardcore Beastie devotees, like myself, will still pick this up and file it next to all the albums its songs are taken from, it is not an album strictly for us. It is an album for the next generation — for kids who are discovering the Beastie Boys through their parents and a family viewing of Beastie Boys Story.

A greatest hits album is meant to crystalize the essence of the artist, and to that degree, Beastie Boys Music does that admirably so. This collection eschews The Meters-inspired jazz-funk tracks that were sprinkled across Check Your Head and Ill Communications, as well as their returns to their hardcore roots on the same albums. (Not many are going to argue that a greatest hits collection should include “Heartattack Man,” no matter how killer of a hardcore track it is). The focus here is on the accepted canon of Beasties hits and the tracks that made them so beloved worldwide.

If this is their final career lap, then it’s a fitting send-off for them; it’s a reminder of everything that made them so great, because more than anything, the Beastie Boys are the soundtrack of fun. With this collection, older fans will revisit those moments in our lives and rekindle those memories with each song. (“So What’cha Want” was the first song I played in my car when I got my license… to drive, not to ill.) However, this collection will serve as a bridge to new fans — the children (or even grandchildren) of those who grew up with Mike, Adam, and Adam.

There is certainly a timelessness to the Beasties’ music that will transcend generations, and as each comes and goes, and even as each of us who remember the first time we saw the 70’s cop-show inspired video when it premiered on MTV are laid to dust, there will still be people with the windows down and “Sabotage” turned loud.