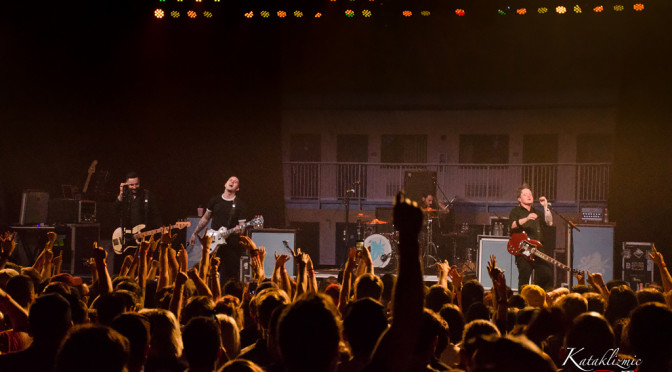 TEMPE, AZ — Tempe was bursting with anticipation Friday night as fans of co-headlining Bayside and Say Anything gathered early outside Marquee Theatre, pushing their way inside to claim their spot in the front row. There was a tangible buzz in the air as people of all ages lined up to be checked by security outside the theatre.

The air was crisp in my lungs as I walked rather quickly behind Burning Hot Events concert photographer Katherine towards Will Call to claim our press passes for the evening. As we arrived for Bayside in the nick of time following some transportation chaos, the opening band, Reggie and the Full Effect, had set a fast-paced tone for Bayside to take the stage after them. As the set change became evident, audience members rushed to claim their place before the stage, rumbling with shouts and claps in a flurry of excitement; and I hurriedly followed suit to find my place in the front corner near the security barrier.

As I quickly worked to get my things in order, I could feel the deep rumbling of the bass move from beneath my converse and slowly encompass the rest of me as the band did a quick warm up. The vast, dual-level concert area makes for great acoustics, which they used to their advantage as they dove into their set with the ever-popular “Already Gone.” The breakneck tempo of this A Day to Remember-esque song sent the crowd into a frenzy of cheers and metal hands as the band members danced around the stage to the opening chords.

“What’s up Phoenix?! We came to sing with you and dance with you!,” vocalist Anthony Raneri shouted into his mic, attempting to rouse the crowd even more. This song comes from the band’s fifth album Killing Time

, which was released back in February of 2011, and it was obvious why they chose to open with it. The exuberant crowd danced and sang along in unison, receiving copious opportunities to sing back the words they’ve come to know so well. Raneri made it known immediately to everyone there that the rest of this particular set was going to be filled with high energy and vivacious songs. And they did not disappoint.

This being my first time seeing Bayside live, I can honestly say I didn’t know what to expect, but the next 12 songs following the opener all had one thing in common: they were meant to make you move. Wanting to keep the electricity flowing, Raneri continued to captivate the crowd with other old favorites such as “Sick, Sick, Sick”, “Masterpiece”, and “Blame it on Bad Luck.”. Guitarist Jack O’Shea and bassist Nick Ghanbarian could be seen dancing around stage the entire performance, singing passionately as they moved fluidly from one song to the next.

, and while it “isn’t a breakup album”, the songs were written to portray a very uncertain time in vocalist Raneli’s life. That doesn’t mean they have to sound that way, however, and as “Mary” followed hastily by “I’ve Been Dead All Along” were blasted through the speakers I was standing precariously close to, the frenzied tempo was enough to keep everyone moving.

While the set was primarily focused on the music as opposed to engaging the crowd, Raneli did pause about halfway through the set to discuss their new album. “CDs are expensive to make and even more expensive to buy” he stated matter-of- factly, and went on to inform the concert goers that the band has created a $5 version of their new album that is available for purchase now. The roar in response was deafening, and all the motivation Raneli needed to jump into the next set of fiery songs that would steadily keep the energy of the room at maximum level right up to the final song “Devotion and Desire” off their very first album.

As I left the Marquee that evening, I couldn’t help but notice how quickly I moved, or the extra spring in my step. This band had even found a way to keep the energy flowing through me, even after their set was over. They show true passion in their music on and off the stage, and gave me the motivation to be as fluid with my writing. This was admittedly my first time writing a concert review for Burning Hot Events, but I can easily say that if every show is like Bayside, I will definitely be back for more.