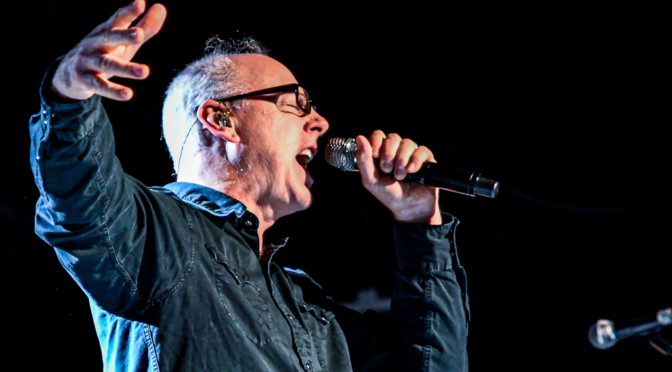 PHOENIX — Bad Religion’s concert at The Van Buren, with support from Emily Davis and The Murder Police and Dave Hause & The Mermaid, was more than just a legendary punk band giving a show at an intimate venue in support of a new album. It was a night where their legacy was felt not only in the crowd but on the stage, too.

Their recent tour is in support of the band’s 17th album, Age of Unreason, released earlier this year. The reason for the band’s longevity is that from their initial formation in 1980 and first release, 1982’s How Could Hell Be Any Worse?, they have stayed true to their ethos and written righteous punk anthems exploring many of the same themes recurring in our society across those 39 years. Any doubt of their staying power could be quickly dismissed with a quick sweep of the audience, where longtime fans of the band loudly sang along and pumped their fists in the air, alongside kids ranging from teenagers and younger. At one point, a father hoisted his daughter up on his shoulders, so she could rock out hard to “Generator” late in the set.

Emily Davis and The Murder Police

The show’s opener was Emily Davis with her backing band The Murder Police, consisting of Jose Macias, Jorge Torres, and Tomas Tinajero. Davis has three previous solo releases, and is touring in support of her debut album with the band, 2018’s Same Old World. Hailing from El Paso Texas, Davis managed to flip the initial impressions given off by the country-ish twang of her vocals, as the songs would quickly explode into all out rockers. Davis describes her songs as “aggressive, introspective folk music,” which could be heard as she and her band tore through seven tracks from the new album with an intensity reminiscent of Neko Case fronting The Attractions, in place of Elvis Costello.

Late in her set, she told the concertgoers what an honor it was to be touring with Bad Religion, adding that her introduction to them came via Tony Hawk’s Pro Skater 2, which means “You” from their 1989 album No Control was her introduction to the band. She closed out her set with “Circles” and the album’s title track “Same Old World.”

Dave Hause and The Mermaid

Up next was Dave Hause and The Mermaid, and if anyone didn’t already know his music (and you should), they might have been fooled by their sound from his quick soundcheck with his band, consisting of short bursts of riffs from songs by Lynyrd Skynyrd and Metallica, which drew some surprising whoops of approval from the punk crowd. When Hause (pronounced like pause or cause, for the record) and the band came back out to start their set proper, he took a moment to joke with the audience that despite their appreciation for the soundcheck, they wouldn’t be hearing covers from either band. “For the rest of the night, you’ll only be hearing songs by me and Bad Religion because this is a punk show!” The crowd roared in approval (although that didn’t stop someone from yelling out for Metallica mid-set).

Hause and his band are touring to support of Kick, his fourth solo album since leaving his previous band The Loved Ones in 2009. His set drew heavily from the new album, save for one track from 2017’s Bury Me In Philly. Prior to forming his backing band The Mermaid, Hause performed most of his shows solo with a guitar, bantering with the audience between songs. Since forming The Mermaid, the sound is louder, but the impromptu moments of interactions with the fans have remained.

The band features Hause´s brother Tim on lead guitar, Miles Bentley (the son of Bad Religion bassist Jay Bentley) on bass, and Kevin Conroy on drums. His stellar song-writing aside, Hause shines when it comes to instantly generating a rapport with his audience. Even when he encouraged everyone to put up a middle finger and direct it towards a particular politician in Washington, and an audience member booed the moment, Hause turned the moment around to something light: “Oh, do you not agree with me? That’s okay. We’re not always going to agree, so go start your own band and write songs about why you think he’s so awesome.” The crowd (including the person who booed) laughed, and Hause tore into “Dirty Fucker.” Hause closed out his set with Kick highlight “The Ditch.” He’ll be back to Phoenix to headline in February.

Any band that’s approaching their 40th anniversary would be excused if their live shows were a serving of pure nostalgia and built a set list around the songs the audience loved from years ago. While Bad Religion managed to cover points all along their discography, what stands out the most about one of their live shows is how prescient the songs feel, with thirty-year-old songs feeling like they were a three-minute prophecy of events yet to happen. All of this is because as a band, Bad Religion has railed against the same ills of society since the band’s inception.

Led to the stage first by drummer Jamie Miller and guitarists Brian Baker and Mike Dimkich, original members bassist Jay Bentley and singer Greg Graffin came out last. Without a word, the band launched into “Them and Us” from 96’s The Grey Race. The song hit the room like an atomic bomb and sent everyone into a frenzy of moshing and crowd surfing. Security guards at The Van Buren earned their checks over the next ninety minutes, as they caught, set down, and guided out multiple people.

“We put out a new record this year, Age of Unreason,” Graffin exclaimed after “Them and Us” faded out,  “which is #17 for those of you who are counting, and we just wanted to get back to play for you before the end of history,” setting up a track from the new album.

“End of History” was followed up by the to-the-point “Fuck You,” from 2013’s True North. Graffin complimented The Van Buren for being the perfect rock club. “How many of you have been to a lot of shows here before?” he asked. With everyone yelling out the number of shows they’ve seen, he joked, “Well, this will be the best one you’ve ever seen here!” This was followed by “Stranger Than Fiction,” the title track from their 1994 album, which in itself laughs at the absurdity of the real world.

They next performed “Dichotomy,” “Recipe for Hate,” and “Chaos From Within,” before Graffin paused again to survey the sea of people, noticing the range of ages staring back at him. Spotting one kid in the audience, he asked how old they were, but after being told the kid was 12 and starting to say that has to be the youngest one, another kid called out she was only nine. Laughing for a moment, Graffin said, “Well, I’ve always said it’s the kids who are our future,” which might have been a double entendre, referring to either society or the band. The show’s next fifteen minutes was a sprint through the band’s catalogue, covering songs from 1989’s No Control through the recently-released Age of Unreason.

To watch a Bad Religion show, you wouldn’t instantly know how long they’ve been playing together, as they bring the same energy to every song now as punk-rock elder statesman, as they did as kids starting out. Pausing after “Automatic Man,” Graffin looked around and asked the crowd where he was. “Oh yeah, that’s right: Phoenix! No matter where we all are, this is still the new dark ages,” as they played “New Dark Ages” from 2007’s New Maps of Hell, an album whose cover art and title served as a knowing nod to their first album How Could Hell Be Any Worse?, on its then-25th anniversary.

Taking a jab at himself, Graffin mused that he was born in the 1980’s and was only two when he wrote the next song. Guitarist Brian Baker chimed in that he was born in 1981. The song was the timeless “We’re Only Gonna Die,” from that first album, a song that shows no signs of being a now 37-year old song. It was quickly followed by “No Control,” which reignited the crowd. “Generator” and “Conquer the World” were played with the same fervor as when they were new releases.

While playing “21st Century (Digital Boy)” from their 1990 album Against the Grain, there was a moment that showed just how much their music has connected to everyone in the grade, both young and old: As the crowd sang along, a kid no more than 15 crowd surfed while screaming the lyrics “I don’t know how to read, but I got a lot of toys!” like the song was written only for him and his generation, even as he passed over the heads of men and women easily three times his age who sang it with the same energy. Bad Religion is still here because their music doesn’t age. There’s no nostalgia in their set. Songs from their debut all the way through the new album live in the moment, just as each member of the audience experienced them the first time.

“We’ve reached the climax of the show, and after you’ve reached the climax, you move into a refractory period. In this moment, we want to dedicate this next song to our favorite people: You!” After the No Control classic and “Paranoid Style,” Graffin told a story about their first album: “Back in the 80’s there wasn’t a whole lot of color choices, so we chose red with the shadowy figure of Los Angeles in the background, and we asked a simple question: How could hell be any worse?” The band’s original anthem led into “Sorrow” from 2002’s The Process of Belief, which was another sing-along across the generations in the crowd. As the song closed out, each member walked off the stage one-by-one, led by Graffin.

For the next two minutes, the fans cheered, clapped, and called out for one more song, before the band emerged for an encore. “I could get all sentimental about Phoenix,” said Graffin, “It was the second city we ever went to play a show. This song is about you and me.” The band closed out the show with “Infected” from Stranger Than Fiction, and “American Jesus” from Recipe for Hate. Before leaving the stage, they took one final moment to acknowledge the audience, pulling up their set lists and giving them to the kids in the crowd, and solidifying the next wave of fans who will continue to carry them on as a band who defies time and continues to produce powerful, relevant music that unites fans of all ages.

Bad Religion will return to Arizona on March 28, 2020 with Alkaline Trio at Marquee Theatre.