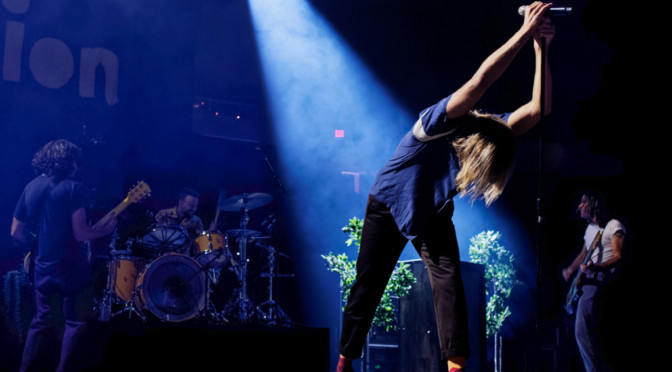 PHOENIX — AWOLNATION returned to Phoenix after a nearly year long absence, playing at the Veteran’s Memorial Coliseum for the first time. The energy and the noise that AWOLNATION brought with them felt like it would bring down the Coliseum. AWOLNATION took a bit of a break from touring in 2019, only playing a total of four concerts all year thus far. This does not mean they sat back and took a year off; rather, they used this time to record. A teaser clip of “The Best” was released on social media on October 15th, and it will be released on November 5th. Next year’s tour dates should be released soon, and per frontman Aaron Bruno, will include another stop in Phoenix. (UPDATE: Despite Bruno’s comments during the concert, Phoenix was not included when the tour dates were announced.)

The Arizona State Fair concert series are unique in that they are shorter, are often only a single band and under an hour and a half in length. AWOLNATION only needed 70 minutes to nearly shake the roof off the Veterans Memorial Coliseum. There was a small crowd on hand when the lights dimmed and Louis Armstrong’s “What A Wonderful World” started to play. Halfway through, it was cut short by the start of “Run”, creating a juxtaposition of the peaceful and the loud, of the lyrics, “And I think to myself what a wonderful world,” and, “I am a human being, capable of doing terrible things.” It was attention-grabbing. it was jarring. It was fantastic.

There are very few artists who can control the energy of an audience like Bruno does. He spoke to the crowd throughout the show, inviting them to dance right before launching into “Hollow Moon (Bad Woof)”. Right after finishing up “Kill Your Heroes”, he announced that he, “Came to party with you tonight!”, as the first notes of “People” were being played. It was indeed a party, a dance party to be precise: “We’re trying to throw a dance party tonight! I’m looking for the best dancer in the building, someone doing something I’ve never seen before!”

If one were to scan the crowd while “Not Your Fault” was playing in the moments after that pronouncement, they would find the old and the young doing everything they could to show him something that he had not seen before. He slowed the dance party down from an all-out frenetic dance to what he called a “perfect opportunity to have an old school slow dance” with “Table for One” — a slower track that lends itself to just that.

AWOLNATION did not keep the energy down for long, quickly bringing it back up with “Miracle Man”. Bruno had another request midway through this song: “I want everybody to jump with me. You don’t have to, but it’d be a lot cooler if you did.” In a matter of seconds the stands were shaking.

While much of the focus is on Bruno and his ability to connect and energize the fans, it is very important to note that the rest of the band is incredibly talented. In fact, Bruno seemed to insist that we recognize this, stepping out of the spotlight a couple of times so the entire focus was on the band. The first was “The Buffoon”, a song that starts slow and works the tempo up until one must wonder if it is humanly possible for Isaac Carpenter to play the drums much faster. The second was for a cover of AC/DC’s “Thunderstruck”, with Zach Irons absolutely shredding on the guitar, leaving many mouths agape.

The show ended with “KOOKSEVERYWHERE!!!”, played for the first time in concert since mid-2017, and finally Bruno looking out at the crowd and saying, “So. What should we do now?” “Sail”, of course. The song that really introduced the world to AWOLNATION closed out this incredible show.

If you missed out on this concert, fear not. AWOLNATION made it very clear that they will be back next summer, and you will not want to miss this one. Keep an eye out for the tour announcement, and buy your tickets to see this amazing band as soon as they go on sale.