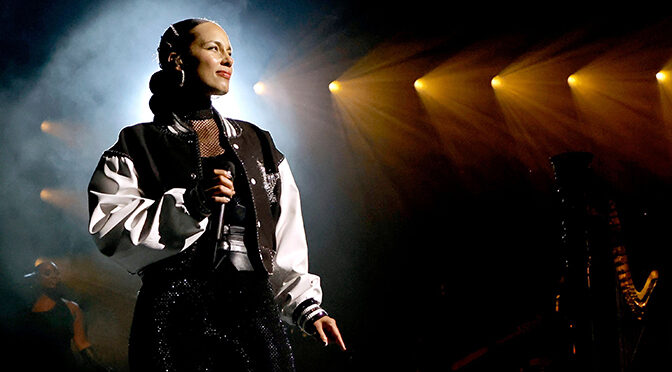 PHOENIX — Alicia Keys brought the house down at Arizona Financial Theatre with her mighty chest voice, riveting talent on piano, and smooth, confident moves in an approximately two-hour performance. The “Alicia + Keys World Tour” is her first since her “Set the World on Fire Tour” in 2013, and it celebrates the releases Alicia (2020) and double album Keys (2021). Beginning in June 2022, the two-legged tour had 19 stops in Europe, and will be wrapping up in late September after 31 stops in North America – totaling 52 shows for the mega-talented Keys. This Phoenix stop was opened by Philadelphia-born singer/songwriter Pink Sweat$, whose debut album Pink Planet was released in 2021 after COVID-responsible delay.

When the lights went down for the “Princess of Soul”, a solar video crescendoed on the screen behind the stage and quickly immersed the audience in Keys’ “world”. After a keyhole appeared on screen, a curtain raised and the commanding and womanly silhouette of Keys was revealed.

Donning a plum taffeta trench coat over a blinged-out bodysuit, she took a slinky stroll toward the front of the stage – her glittery costume but a fraction of the shine of her charismatic presence upon her arrival. Keys said, “the vibe is amazing in here”, as she expressed appreciation to offer an “intimate” show to her fans, adding, “this energy is just what I wanted.” She kicked off her 34-song set with “Nat King Cole” from Keys, entrancingly playing her mobile grand piano while crooning and belting soulful lyrics.

Keys moved into a mashup of the Kanye West-produced “You Don’t Know My Name” and “Will You Ever Know It?” followed by a reggae-inspired version of “Wasted Energy” also from the Keys album. Soon after, she played a powerful, key-pounding version of “New Day” from 2012’s Girl on Fire.

Following was a sultry execution of her 2005 Grammy-winning song with Usher, “My Boo”, then she put her spin on “Nobody” by DJ Khaled. Her band, which included a standing bass, guitar, back-up vocalists, and two additional keyboard players showcased their talents in an interlude of Michael Jackson’s “Off The Wall” while Keys briefly left the stage.

Video clips of Harlem appeared on the screen behind Keys, who was now sporting a silk white and black jacket emblazoned with her name. Up next was an astounding version of her and Jay-Z’s hit “Empire State of Mind”.

Later, Keys exuberantly played DJ while surrounded by three keyboards, offering up alternate versions of three of her hits: “Skydive”, “It Is Insane”, and “Only You”. Her new 2-disc album Keys offers original versions on the first disc, “unlocked” versions on the second one, and on the deluxe edition – Keys II (2022) – some additional songs and alternate mixes. She made a game of the alternating versions, playing samples of each, bringing up the house lights, and having the crowd vote between versions with cheering.

After Keys descended the stairs and showed a little love by briefly walking into the screaming crowd, she returned to the piano for a heartfelt version of “Girl on Fire”, followed by her homage to self-love: “Superwoman” from As I Am (2007). Fans were asked to turn on their phone lights before joining her in singing “Fallin’”, and the room lit up both visually and in spirit for the beloved hit song that became a massive hit after she wrote and produced it herself in 2001.

She treated fans to her dancing skills and self-assured voguing during “In Common” (Black Coffee Remix), which brought an infectious buzz to the atmosphere. The screams of her fans well-represented her idol status.

After a bountiful hour and forty-five minutes, the pre-encore ritual began before her band started up with a slick instrumental version of Prince’s “Purple Rain” featuring a mean solo on a Gretsch by her guitarist. When Keys returned to the stage, she proclaimed, “this thing is special that we did tonight.” She was not wrong. Her library is full of songs about growth and loving yourself. She added, “the energy is beautiful; the energy is perfect”. What is more, Keys encouraged the audience to “make every moment count”, to push past fears, to live and love in an unpredictable world, “because what else even matters?” Her encore included “Like You’ll Never See Me Again” and “If I Ain’t Got You”.

Keys’ performance was beyond outstanding – all the while exuding a heart of gold and exhibiting a warm, beautiful smile with a lovable, joyful presence – demonstrating what made and sustains her superstar status. On the same night, Kendrick Lamar as well as Alice in Chains with Breaking Benjamin and Bush were also performing in Phoenix at Footprint Center and Ak-Chin Pavilion. Of the many tours to choose from to spend your hard-earned dollars on this year, the “Alicia + Keys World Tour” was most certainly a worthy, once-in-a-lifetime experience. 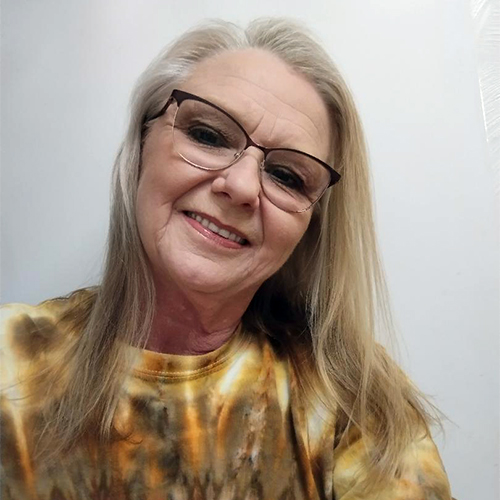 Concert Photographer, Music Journalist at Burning Hot Events
Former concert and festival photographer for Music Voice and No Cover Magazines in Phoenix. Contributor to various other magazines, radio shows and websites both locally and nationwide. I am an Arizona native, Cardinals football fan, crafter, and yard-sale addict. Music is what my life is about.