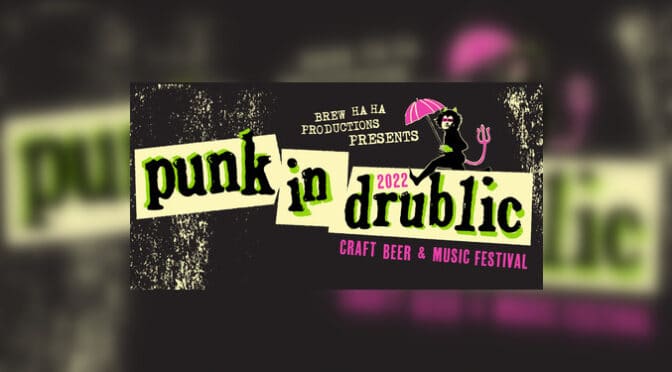 This article has been updated with the new venue for the Arizona date: instead of Big Surf Waterpark in Tempe, the festival will now take place at Bell Bank Park in Mesa, AZ.

Lineups vary by city and feature bands including Pennywise, Face To Face, The Bouncing Souls, Me First And The Gimme Gimmes, Lagwagon and more on certain shows.

Tickets for these 21+ events go on sale Wednesday, January 19 at 10:00 AM local time at www.PunkInDrublicFest.com

The Punk In Drublic Craft Beer & Music Festival was created from the mind and livers of NOFX‘s frontman Fat Mike and craft beer fanatic / festival promoter, Cameron Collins of Brew Ha Ha Productions–and named for NOFX’s classic Punk In Drublic album, which has sold over one million copies.

Music lineups for each festival date are as follows:

Fat Mike said, “I’m really looking forward to playing these shows for many reasons…I literally spent minutes calling bands and putting this line up together…So if you’re gonna go to one punk show this year…Go to one of these, they’re outdoors!“

Festival co-producer / co-creator Cameron Collins of Brew Ha Ha Productions said, “Punk In Drublic is one of the best touring festivals on the planet right now in my opinion. It’s pure, it’s organic and it’s everything punk rock should be. We’ve been doing it since 2017 and though we had a crap 2020 like everyone else with the pandemic, PID is back and better than ever. I can’t wait to get back out there with our people!”

Each Punk In Drublic Craft Beer & Music Festival date will feature up to three hours of craft beer tasting showcasing an impressive selection of craft beers, including some of the region’s best. Participating craft breweries will be announced in the coming weeks. Attendees can also enjoy food for purchase from local food trucks and vendors, with vegan options available.

In February 2021, NOFX released Single Album (Fat Wreck Chords), their 14th full-length studio album. The band is also featured in the recently released Punk In Drublic documentary, which chronicles the first three years of the touring the Punk In Drublic Craft Beer & Music Festival since its 2017 debut. Visit https://punkrocktv.com to see the film.

The Punk In The Park Tempe, AZ show is produced by BHHP in collaboration with Arizona promoter Nancy Stevens.

As always, health and safety of festival patrons is of utmost importance. The festival producers are working with local health authorities to ensure that the event is safe and in compliance with all local regulations.