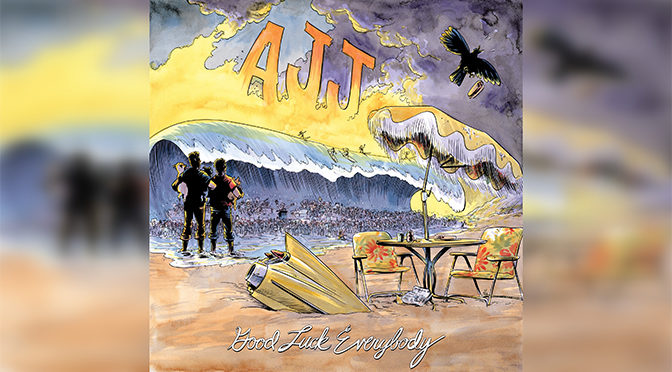 When you think of albums that are specifically “of their time,” so to speak, it usually evokes folk protest anthems of the 60’s, such as early Dylan songs or maybe the way New York punks at CBGB tapped into a growing angst in America. More recently, I think of Springsteen’s The Rising album, which was not written about 9/11 and yet seemed to speak to much of the pain and sadness in America in the immediate aftermath. In moments of our history that are so big and uncertain (as overused as that word now feels), music is our anchor, providing stability and a sense of relief. Though released on January 17th of this year, AJJ’s Good Luck Everybody feels like an album that was meant precisely for our current reality of social distancing and shelter in place. It feels like an album written at home in search of a comfort that we have all been robbed of as our world has been turned upside-down, and as a reprieve from the constant sense of dread we have been left with.

On this, their seventh studio album, Arizona’s own AJJ – a folk punk band – has captured the anxiety and anger and angst and fear of life in the midst of a pandemic. Written and produced by AJJ’s core duo of vocalist/guitarist/founder Sean Bonnette and bassist Ben Gallaty, alongside lead guitarist Preston Bryant, cellist Mark Glick, and returning long-time engineer Jalipaz Nelson (who has worked on the majority of the band’s releases), it’s an album that yearns for a return to normality and seeks shelter from the storm, while also wanting to run out into the open and yell curse words at the sky just to let out every bit of pent-up anger and frustration. Even as the album works through so many conflicting emotions, it feels like it’s all coming from one place: the anger we feel at forced uncertainty. Even the title Good Luck Everybody, feels like a final parting line to a group of people marching into potential doom. The album still wants to feel hopeful, even as everything surrounding us screams that all hope is lost.

Following the opening track, and the album’s first single, “A Poem,” which seems almost apologetic of the meaningless of art in our current reality, the album gets down to business on the second track. “I can feel my brain a-changin’, acclimating to the madness / I can feel my outrage shift into a dull, despondent sadness / I can feel a crust growing over my eyes like a falcon hood / I’ve got the normalization blues / This isn’t normal, this isn’t good,” starts out the second track, “Normalization Blues,” which is a slice of vintage 60’s protest Dylan, when he still wanted to be the next Woody Guthrie. Think of it like a modern-age “Talkin’ World War III Blues” for a generation weaned on social media and streaming services, except now the World War we’re all living through is being fought in the midst of smartphone-addiction-fueled indifference on our parts and gaslighting by our leaders. Even the closing line, the album-titular “good luck everybody”, feels like it’s being said with a resigned sigh, rather than with an ounce of hopeful conviction.

It might seem hyperbolic to say that this album in some way predicted the storm that lie just ahead for our country upon its release, but  “Body Terror Song” comes replete with the refrain “I’m so sorry that you have a body.” Since the album was released, and especially in the whirlwind “shelter in place” of the last couple of months, it almost seems to detail the creeping fears many of us, willingly or otherwise, have developed of our own bodies, wondering if every cough or short breath means we have “it.” Our fears have given way to a constant feeling of dread at the one thing we can’t avoid: ourselves.  “One that will hurt you, and be the subject of so much of your fear / It will betray you, be used against you, then it’ll fail on you my dear”, Bonnette sings, but as he himself noted about the song in a Reddit AMA, “Music is made to project your own experiences onto,” so maybe I’m just projecting my own insecurities here. However, I do think that the line “But before that, you’ll be a doormat, for every vicious narcissist in the world / Oh how they’ll screw you, all up and over, then feed you silence for dessert,” is still pretty spot-on for the current climate.

Whatever perceived political intentions that might be read into some of the tracks aside, the plaintive piano ballad “No Justice, No Peace, No Hope” addresses the catastrophic political elephant in the room directly, admitting to the feelings of hopelessness in it all, as we are daily bombarded by seemingly nothing but bad news. “I used to comfort myself with the myth of good intention / I can’t believe that I believed that goodness was inherent” is a relatable sentiment. Still though, Bonnette seemingly can’t give up hope, as he winds down the song with “Again we’ve slipped inside a pit of absolute despair / That’s where we live / Until we don’t”, choosing to read this, of course, as a sliver of hope and not an acceptance of defeat.

“Mega Guillotine 2020” is a love song for a glorious end to all the chaos, with a campfire sing-along cadence. The lyrics are straightforward and sung like someone watching an asteroid hurtling towards earth that decides instead of panic, it is a better idea to just chill out and accept the inevitable fate. If hopeless is hurtling towards us, what’s the point in dodging when there is nowhere to dodge? However, it is exactly when things are the darkest, and our faith in salvation is being tested that we find a reason to keep going, which is to say that sometimes we need to take pessimism for a test drive in order to find our optimism. We may welcome the guillotine, but we’re ready to pull our heads away at the last possible moment.

While much of the album expresses frustration with the current state of our world, “Psychic Warfare” takes a direct shot at the chaos caused by the “commander-in-chief” and his daily assaults on reality. Its anger is palpable and mirrors the overwhelming sense of anguish so many have felt every day. “For all the pussies you grab and the children you lock up in prison / For all the rights you roll back and your constant stream of racism / For all the poison you drip in my ear, for all your ugly American fear,” are lyrics you might want to scream into a pillow when it all gets to be too much. It is a song that’s right there with us, with a boiling rage of “f— all this b.s.!”

The album closing track “A Big Day for Grimley” acknowledges that we have far to go before life resumes a true sense of normalcy. “Now I don’t suffer any more bullshit gladly / Even though everything’s bullshit now, here in 2019 / And you can bet it’s gonna be a bunch of bullshit too out in sweet 2020 / Or whenever this album’s released,” may seem designed to leave the listener on down note, but AJJ is not a band that thrives on hopelessness, and instead leaves us with a hope for a better tomorrow, wishing for “Solitude for the stoic / Mirth for the merry / A quiet room for the overwhelmed / Arcades for the ADHD / Health for the sickly,” and leaving us with the album title once more, this time sung with the conviction missing in its previous appearance: Good luck, everybody.

As Bonnette said of the album upon its release: “I really hate explaining myself, but since I think it’s important I’ll make the theme of this album explicit: Basic human connection is the path to our collective return to sanity.”

Though we are sheltered in place, human connection is still possible. Music connects us and reminds us that we are still alive, even when we each may be hitting the point where it feels like we’re bouncing off the walls. There is no more unifying of an experience than singing along with a song we love so deeply and so personally at a concert, which unites us with every other person at the show who joins in. In those moments, we are one with each other. Now, we will unfortunately be robbed of live music for a while, but that doesn’t mean we are robbed from connecting through music. This is an album of songs that could double as mantras in a pandemic: we are still alive and we will survive this, no matter how grim it might feel. Put on Good Luck Everybody, and sing along and know that out there somewhere, a stranger is unwittingly joining you in the moment. What more could we ask for from an album?