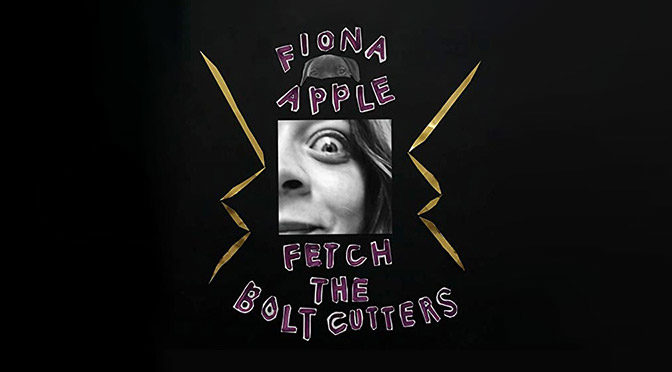 “We must kill the false woman who is preventing the live one from breathing.”

We do this to women. We expect a performance, and the exact one we desire, on demand: Manic Pixie Dream girl, vixen, maiden, mother, crone. We want to dial a number, press a button, swipe right, and order up exactly the kind of woman we want. We box women in, pigeonhole them; we do not let women evolve, and we do not let them be. And by we, I do not mean men; I mean the entire world. We ask women to stuff their whole selves, containing multitudes, into boxes, so that we might more easily handle them. Well, Fiona Apple has fetched the boxcutter and the bolt cutters, too.

At first listen of Fetch the Bolt Cutters, I myself am guilty of this. I was unnerved by the seemingly random acoustics that permeate the album, that seemed to bookend each track. I wanted to hear the contralto register, the impressive range and moody piano ballads of Tidal, the aggressive lyrical onslaught of When the Pawn. I wanted Fiona Apple to repeat a performance of the woman she used to be, a self she has since outgrown.

Fiona is not going to put on a mask for us. We’re asking her to remain the victim, angry at the world while she’s now a self-actualized, grown-ass woman, wandering around her house using whatever’s around her to express herself, to make music. Apple will never make another Tidal, and we shouldn’t want her to, because she is not just revisiting her pain, but growing through it. She shares herself with us rawly and authentically in this album, and it is a sin to ask of her anything else, any former selves she’s outgrown.

Evident from the opening track “I Want You To Love Me,” Fiona did come to play with us hoes; she’s exploring a playful sound that’s only grown since The Idler Wheel, one in which, rather than reigning herself in, she’s ending the track with yips and some sort of high-pitched dolphin sound. This intensifies in the title track “Fetch the Bolt Cutters,” and by this third song, I was fully like, “What is she doing?” There is so much barking sprinkled through the end of the track, the listener will wonder if it’s coming from a neighbor. That’s it, though: she’s using what’s around her — her house and her own world, her pet even — to bring us in. It is a strange joy, one that fully embodies the idea of cutting loose.

Through the album, sonic experiments abound, the extent of which, at one point, made me think Fiona Apple’s sound is now like dog slobber to cat people. What to do with this mess? It devolves into at best jazzy, at other times wholly chaotic noise. Apple is a few rattling cans away from a straight-up noise project.

Yet, her lyrics, as ever, continue to land, a punch right in the gut: “I know a sound is still a sound around no one”, and in “Under the Table”: “I’d like to buy you a pair of pillow-soled hiking boots/To help you with your climb/Or rather, to help the bodies that you step over along your route/So they won’t hurt like mine”. By the time she intones the titular, “Fetch the bolt cutters/ I’ve been in here too long” there is no question that this is not about us. Being a musical audience is passive, a spectator sport, and Apple has worked too damn hard to shut up, not now. She doesn’t speak the truth, she spits it out like hot grease.

Arguably her most vulnerable album yet, we begin to see places where Apple has untangled the threads enough to weave together something new. In a recent interview in Vulture, Apple admitted that past perfectionism fenced her in:

“If you grow up and you’re praised a lot for being special, rather than for making an effort, you end up later in life being afraid.”

Being gifted, and being expected to call up a gifted performance in perpetuity, was a prison that kept her from appreciating her own efforts, from experimenting, made her afraid to try. What we hear in Fetch the Bolt Cutters is Apple finally feeling free to roam, to play.

In “Relay” which Apple actually started writing at 15, there are glimpses into what’s been ruminating in her mind. “Evil is a relay sport/When the one who’s burned/Turns to pass the torch” Basically, hurt people hurt people. Fiona Apple’s music, for so long, has spoken especially to survivors of assault. We could watch her rage, hear her croon vitriol in a way that elevated hurt into something divine, and made good art. Survivors need to see examples, like Apple, of someone not only overcoming their hardships, their assaults, but using them to create something new. This is how they stop being victims.

I was reminded of Marina Abramović while listening to this album, specifically her art project that involved sorting and counting thousands of grains of rice. Participants had breakthroughs, visions, and powerful transcendent experiences. What Apple has done with this album—using her house as instrument, showcasing her friends and pets — it is clear she has found her own meditation in an emergency, has built a cathedral with all of these avant-garde sounds to house her voice, which has now become its own instrument.

Starting with “Newspaper,” the album’s sound takes on a focused quality, infused with bluesy rhythms. Her lyrics are, somehow, increasingly introspective when she near-growls about “trying not to let my light go out” and the track feels meditative, in a way. Apple is finally focusing on relationships that matter, both her relationships with other women and her relationship with herself. This was hinted at in track two with “Shameika,” and it comes to full bloom now. (“yet another woman to whom I won’t get through”)

Much of the tonal shift, I believe, we see from Apple in Fetch the Bolt Cutters comes from a new perspective on her part, one of reconnecting with relationships with other women in her life. It’s essential to see other women free to express themselves, and Apple is pointing out this is a continual struggle. Patriarchy has long divided us against each other, taught us to shame, police each other and internalize misogyny, in order to better conquer.

By the time we get to one of the standout tracks from this album, “Heavy Balloon”, which is frankly incredible, this track best displays the shift that has taken place in Apple.

She has not kept it a secret that being assaulted early in life majorly affected her sense of self, and surviving being raped at 12 years old led to a lifetime of eating disorders and body image issues. These are ways survivors attempt to regain control, an agency that was stolen.

“Heavy Balloon” is filled with personification, identifying with plants (“I spread like strawberries/I climb like peas and beans”). It has a mouth-feel, nourishing, as it contains imagery of fruits and vegetables, not in a final form, but growing; Fiona has learned to love the body she lives in by understanding it, listening to it, communicating with it. (“I’ve been sucking it in so long/That I’m busting at the seams”) Apple is finally dealing with the things that have held her in—mainly, herself.

“You get dragged down, down to the same spot enough times in a row,
The bottom begins to feel like the only safe place that you know.”

If there’s one thing I can say for Fetch the Bolt Cutters, is that Apple eases us into the heaviest shit. Not that she’s ever taken some turn to saccharine, ever only scratched the surface, but there is a build up to the line “Good morning/You raped me in the same bed your daughter was born in/Good morning” in the track “For Her.” Apple has reconnected with her own anger in Fetch the Bolt Cutters, and she admits the irony that in doing so, she’s created her most upbeat-sounding album. There are really no slow, sad ballads here. In an interview, she confesses she finally feels anger towards the man who assaulted her as a child and realized making excuses for others fails to hold them accountable. There is a decided connection between Apple’s righteous, justified anger and finally being able to fully, freely express herself. She feels free.

By the time we reach the end of the album with the final track “On I Go”, this journey that is Fetch the Bolt Cutters has come full circle. Welcome to the Order of Saint Fiona, a sanctuary in which it is revealed to us that the highest transformation is severing the ties that bind us and weaving them to make art, art that connects. Wabi-sabi for the skeptical. From the beginning of the album and the ragtime saloon sound of the opening track to a near-growling in the middle with “Newspaper”, or the waltzy “Cosmonauts” to hymn-like refrains with the final track, we get to hear what it sounds like when a musical heroine stands up herself and marches to the beat of her own drum (or wall, or countertop, or whatever).

Some have made connections between this turn for Apple, a new sound, and that of Radiohead, mainly in terms of albums that exist as a coherent whole, a complete organism—one which grows on the listener. It is accurate that Fetch the Bolt Cutters has a progression, a purpose, a message. And it is true that Apple has made use of what’s around her to create, a DIY ethos, in a way that is punk as fuck, in the canonical sense of the word.

Still, I fear I am failing Fiona Apple with this review, as I too want to offer a perfect tribute to a woman who demonstrated to me what it looks like to rise from the ashes, that moments of rage are not only justified, but holy. As I’ve long suspected, words fail us when we need them most. Apple herself has said that Fetch the Bolt Cutters is about liberating voice, but no, actually, much more than that; that’s not precise enough. Much has been made of her various states of well/unwell, lots of gazing at her mental health, but this album shows what beauty and art can come from a woman alone in a locked room — the antithesis of yellow wallpaper.

Still, there is caution that comes with labeling Fiona Apple as “finally free”: to do so would stuff this iteration back into that box, asking it to hold still. This is a woman we’ve watched, seen and heard, cut herself loose over and over, inspired us to call it like we see it, shown us resilience by not “shutting up” and now MacGyvered her way into an album wholly original, purely hers, and sorely needed.

Lindsey Novak is a writer who followed the sun west from her native Missouri Ozarks to the dusty Arizona East Valley. She teaches composition for Arizona State University and her work has appeared in The Rumpus, Puerto del Sol, Chattahoochee Review and others. She lives in Arizona with her husband Ryan and their furbabies.