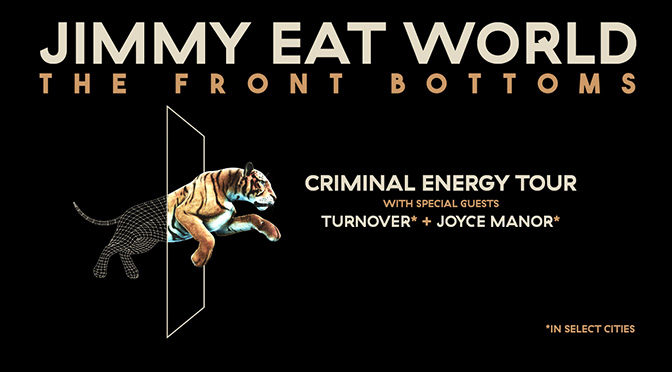 Jimmy Eat World announce their Criminal Energy Tour today. The 20 date summer run will start in Atlanta, GA on August 6th and culminate in a hometown gig in Phoenix, AZ, Labor Day Weekend, on September 5th.  New Jersey based The Front Bottoms will join the tour as direct support with Turnover and Joyce Manor splitting the duties of opening the festivities on select dates (noted below). Tickets for the tour will be available to the general public starting on Friday, March 13th at 10AM local time with various presales beginning as early as Tuesday, March 10th at 12pm local time. The tour is produced by Live Nation, For more information and tickets please visit www.JimmyEatWorld.com.

Jimmy Eat World continue the 2020 roadshow in support of their “bold, brave and  ultimately defiant” (NME)10th studio album, Surviving (listen here). With 10 records to pull from, the sets will prove to satisfy all fans new and old… As the band proclaims:

“Whether we’ve slept on your floor after the ‘97 basement show or you’ve just only recently heard about us, we will have something you’d be into catching live!”

Not to be missed, The Front Bottoms recently returned with “Camouflage,” a standalone single teasing a larger body of work on the horizon in 2020.  The FADER declared the song, “…a celebration of sorts for a band perennially on the fringes of a major breakthrough.”