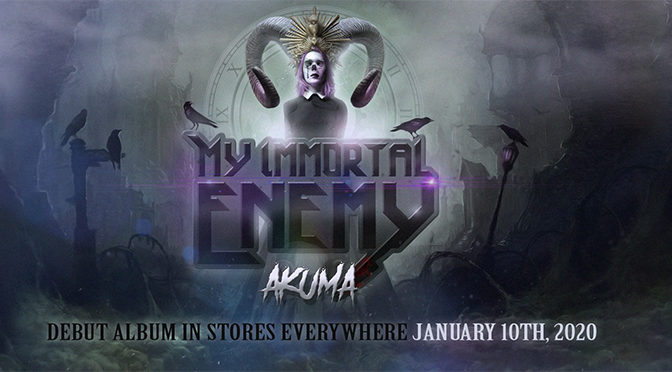 Rock and punk fans should keep an ear out for the band My Immortal Enemy, especially if some of your favorite bands include Beartooth, Avenged Sevenfold, My Chemical Romance, and AFI.  Steven Juliano is their vocalist, Joel Chandler is bassist, Ryan Loomis is on drums, and Ryan Heggum is the guitarist.

If Juliano’s name sounds familiar, then perhaps you’ve heard of the band I Am Ghost from Epitaph records. Juliano is hitting the ground running with My Immortal Enemy, and their new duet album Akuma, featuring 12 head-banging rock songs, is coming out soon on January 10th, 2020. Their album was recorded at Indigital Studios in Santa Cruz, CA. It was mixed/mastered by Zack Ohren who has previously worked with Machine Head, All Shall Perish, and Set Your Goals.

Most of the members are still in their early 20’s and are excited to hear what music lovers think of their new record. They can’t wait to hit the road and meet their fans on tour, hopefully sometime in 2020.

Juliano generously gave Burning Hot Events some of his time to discuss the album concept, choices behind its development, and band evolution:

Interview with Steven Juliano, Singer of My Immortal Enemy

The word “akuma” is Japanese for “demon” or “devil”, and Akuma is also the name of a character from Street Fighter. What is the inspiration for your album title?

Juliano: From the very beginning, before we had even written a song, I had a concept for this record. With my last band (I Am Ghost), rock-opera-albums was our thing, but after the band disbanded I started a few other music projects and kind of steered away from all that. The reason being concept albums are a lot of work. Mentally hard work. I wasn’t ready to wrap my head around such a large endeavor then.

This time I felt I was ready again, knowing all too well I was making a lot more work for myself lyrically. But I like challenges, I guess. I’m a glutton for punishment as they say. So, I created this detailed story; a semi-fictional tale with me as the protagonist, the devil (Akuma) the main antagonist. It’s a life journey story in a sense, something I believe we can all relate to.

On your website and on SoundCloud, the track “Paradise” shows an image of Baphomet, a Satanic deity. Lyrically, does your album contain a lot of occult elements? If so, does this reflect your personal beliefs, or is it more of a stylistic choice?

Juliano: It’s all about the concept of the album, honestly, and has nothing to do with our religious beliefs. None of us in My Immortal Enemy are Satanist. None of us are very religious to begin with. I’ve been asked by a lot by people on what the artwork means, why all the dark/religious undertones, etc… and it’s hard to explain since the album isn’t out yet. Once you hear it all in context, it makes sense.

What drew you to having Zack Ohren produce your debut album?

Juliano: The band actually wrote/produced the album ourselves and Zack did the entire mixing/mastering. Before he came on board we had another guy, a semi-famous gentleman whose band had sold millions and millions of albums in the past. So we thought it was a no brainer to have him mix our album. Well, his mixes were turning out… terrible. And not only terrible, he was taking months to get mixes back. There was a definite low period in the band. I had never gone through anything like that before in my career. We all felt helpless, like our album had been hijacked. Finally, I just called up the guy and fired him.

Soon after the search was on for a new mixing-engineer. My bass player told me about a guy he’d worked with in the past, a guy whose discography of bands was perfect for what we’re trying to convey. At the time, Zack was working on the new Machine Head album but graciously took on our project.

Out of all the tracks on your new album, why did you choose “The Laughing Heart” as your first single?

Juliano:  Figuring out the first song to release is always difficult. Especially from a new band no one’s heard of yet. You have all these questions swirling in your head: “Do we release an aggressive song? A “radio song”? What if no one likes it? Blah blah blah.” All artists are insecure in a way. If they say they’re not they are lying. We decided it was best to release something that had a little bit of everything.

What I’ve learned from doing this for so long is that not everyone is going to like your music. It took me quite some time to realize that. Easier said than done… I know. But in the end you just have to put out songs you dig and keep moving forward. Second thing I’ve learned (mostly by trial and error) is that if you’re writing honest music with honest lyrics, people tend to lean towards that more often than not.

Currently showing four men as your band members, who is the female vocalist on tracks such as “Into the Blue”?

Juliano:  At the early conception of the band we had a female guitarist who played and sang on the album. But, as in life, shit happened… shit that was completely out of our control. One minute she’s all about that tour life… the next minute she’s like “I’m going to get married and I don’t want to be in a band anymore.” Ultimately she moved away and gave up.

We know how difficult it can be to retain band members in a new band. With six members listed on your Facebook page, have you gained and lost many members over the past year? If so, how were you able to recover?

Juliano: We’ve been lucky enough to keep the four main members, all of whom are the main song writers of the group. So in retrospect it’s been rather painless. Most touring bands have members who are really just hired guns anyways, so the fact we’ve kept our core unit in tact is a blessing.

How is this band different, in sound or otherwise, than I Am Ghost?

Juliano: The biggest difference with My Immortal Enemy and I Am Ghost is that I Am Ghost had a strong, almost ungodly major label push from day one. I Am Ghost was signed by Epitaph Records very early in our career. We signed a three album deal after only a couple of shows under our belts. And when I say couple, I mean only like three of four shows… ever.  After that we became another monster. We had real management and agents and a team of publicists… big dogs that would never even return my emails in any of my previous bands… and all this happened literally overnight.

My Immortal Enemy, on the other hand, is all DIY. We do everything ourselves. We paid for the recording and mixing of our album ourselves… which was very expensive. Our upcoming music video we paid ourselves. We book all our own shows. I design all the artwork in the band. The negative in all that is its financially draining. The positive, and you have to always look at the positive being in a band, is that there is zero outside influence regarding our music, and for the moment, we rather enjoy the freedom. As to the actual musical styles between the two, My Immortal Enemy is definitely very similar, although I wasn’t trying for that to happen at all. It just kind of happened, I guess.

Your website currently shows a “coming soon” message under the “Tour” section. Are tour plans currently in the works to support the album release?

Juliano: We wanted to take off a few months and get the album release in order. All that takes a lot of work since we are doing it ourselves. Also, being that it’s winter, there really is no reason to hop into a van and travel the US battling all that darn rain and snow. Again, I’ve been touring since I was 19 years old, so subsequently I know how it goes. Winter dates more likely than not get canceled because of bad weather, and most importantly it’s too dangerous traveling. We will be back early 2020 with tour dates, so rest assured. We hope to play as many shows and in as many different places as we possibly can.

What headlining bands would you love to tour with?

Juliano: The cool thing about our band is I feel we could tour with anyone and do ok. We have that definite metal vibe but I’m a punk kid at heart and I think we’d do well on a punk tour, or a hard rock tour. I think we’d fit in well on a pop punk tour… hell, throw us on a ska tour we’d survive. But bands that would be fun to tour with would be bands like Beartooth or Avenged Sevenfold, or even My Chemical Romance now that they have gotten back together.

How are you going to celebrate the release of your new album?

Juliano: This might sound stupid but it feels as though we’ve gone to war in some far off country and have finally returned home… like years later.  There’s definitely this “Holy shit man, we did it. We made it home alive…” type mentality with the four of us, which in the end has only brought us closer together. Ultimately, bad things happen in life… things completely out of your control and you can either be resilient or just give up.

But we honestly believe in this album. We think it’s not just good, but rather exceptional. Especially if you know all the history surrounding its inception… of how many times we were knocked down but kept getting back up. My Immortal Enemy are fighters, that’s for damn sure.

Also Available for Pre-Order at:

Connect with My Immortal Enemy