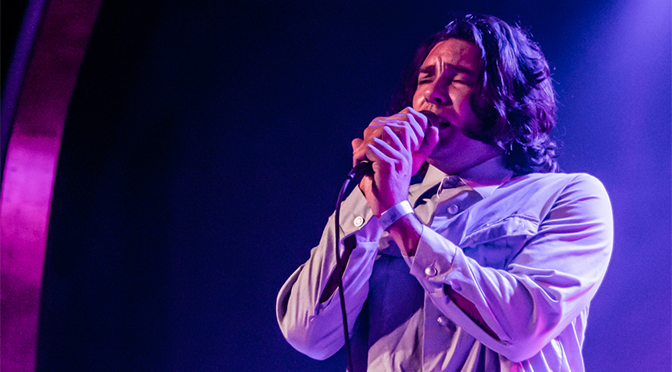 PHOENIX — Opening their headlining Arizona show with an aptly titled track, “Heaven in Hell”, California beach goth rockers The Growlers played to a sold-out Van Buren venue that prepared them for their ambitious 2019 tour. The tour will include 52 concert nights over the next four months, finishing up in the heavenly City of Angels and Stars on Halloween night. Supporting The Growlers is Rinse & Repeat, an Orange County post-punk band.

Rinse & Repeat can be best described as a space age psychedelic synth group that have a perfect mix reminiscent of The Aquabats, Divo, and maybe even some Peter Gabriel. Full of energy and theatrics, the nice commenced with their performance that was engaging, fun, and showed much dedication from the band members: Aaron Bones on bass, Riley on guitar, and Rodney on the drums. They put on a show that went beyond their songs and took us through their “space” struggles and successes.

Sufficiently warmed up and likely grateful the show was in the climate-controlled venue, the crowd thoroughly enjoyed and sang along to each and every song with lead singer Brooks Nielsen, as if the lyrics popped up before them like a karaoke video.

The Growlers went through a total of 23 songs and 2 encore pieces, and unlike most mainstream bands, did not spend much time talking to the crowd in between songs, instead engaging them through their music.

Heaven in Hell
One Million Lovers
Dope on a Rope
Orgasm of Death
Naked Kids
The Daisy Chain
Someday
Love Test
Beach Rats
Rare Hearts
Hiding Under Covers
Who Loves the Scum?
Problems III
When You Were Made
Monotonía
Pavement and the Boot
Empty Bones
Vacant Lot
Night Ride
City Club
Drop Your Phone in the Sink
Chinese Fountain
I’ll Be Around

With such a jam-packed setlist, the fans got what they paid to see, The Growlers singing their favorite songs live, with an extensive sample of their successful discography. Perhaps, referencing lyrics from the opening song, their fans were able to “find a haven” in their immersion in the music and energy of one of their favorite bands.

Nielsen seemed shy and tired, as he himself mentioned after singing just a few songs, “I’m tired, and it is only day one”, but as the show evolved, so did his energy and engagement. As their night ended, he expressed his gratitude to the audience for the boost, saying “Thank you Phoenix, we’re ready to tour now!”

The lyrics from their closing song “Going Gets Tough” seemed to be applicable for The Growlers that night: