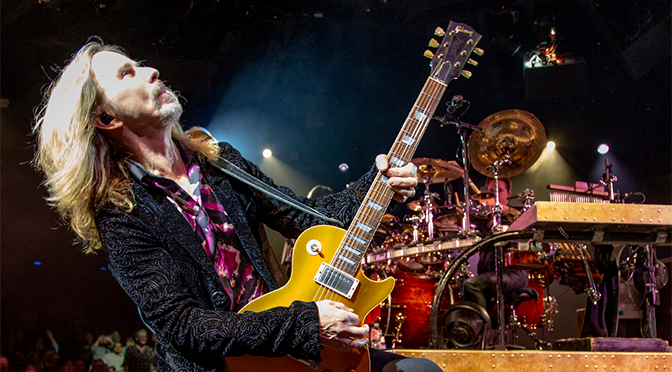 PHOENIX — Celebrity Theatre was a fitting venue for the return of Styx to the Valley for a two night engagement on January 11th and 12th. Located at 32nd Street and Fillmore, the legendary theatre in the round has hosted the cream of music royalty since it first opened as the Phoenix Star Theatre in 1964. The unique circular, rotating stage and intimate atmosphere have made the Celebrity a staple music hall in Phoenix for nearly six decades. Not one seat in the venue is more than 70 feet from the stage.

The show on January 11th started a little late, most likely a result of the parking delays. The line of cars snaking southbound down the right lane of 32nd street moved at a snail’s pace leading up to the entrance. Folks of all stripes were milling around the theater, ordering drinks and chatting excitedly under the catwalk above the stage. Others lingered outside, chain smoking or vaping, listening for a sign to run back inside for the start of the concert.

From their humble Chicago beginnings in the early 1970’s, to their outlandish high production theatrical arena shows of the 80’s, Styx has been a familiar voice on the radio for generations, with a career spanning over half a century. As the first band to have four triple platinum albums in a row, they are an integral part of the soundtrack of many people’s lives. Their importance to rock music as a whole has been unfairly marginalized for years, and in the words of Julian ‘Frankenstein’ McGrath from Big Daddy (1999), only catching “a bad rap because most critics are cynical assholes.”

The current lineup includes veteran Tommy Shaw on lead guitar, with founding members James “J.Y.” Young and Chuck Panozzo on guitar and bass respectively, with Chuck performing on a more limited basis. Chuck’s twin brother and co-founding member of Styx, John Panozzo, originally played drums, but sadly died of cirrhosis of the liver in 1996. Since then, Todd Sucherman has been the band’s drummer. Playing backing guitar, bass, and vocals is Ricky Phillips of Bad English and The Babys, who joined the band in 2003. Vocalist and keyboard virtuoso Lawrence Gowan is a high-energy showman, but you would have to be in order to replace estranged former frontman Dennis DeYoung, as he did in 1999. A band with a history as rich as Styx merits such a historic venue as Celebrity Theatre.

The house lights suddenly dimmed, eliciting hoots and cheers from the audience. As soon as the spotlights kicked on, the band flew right into “Gone Gone Gone” from their latest album The Mission, released in mid-2017. From the first frenzied notes played on the dueling guitars, the crowd was on their feet. Fans young and old danced in the aisles while others rushed to their seats, full beers in hand. The song does not sound at all unlike the old Styx — high-energy and fun.

Not a moment after the first tune ended, the iconic organ riff of “Blue Collar Man” sternly commanded the grateful crowd’s attention.  Each band member’s precision assured the crowd that Styx had not lost a step from their golden age.

Next was their hit “The Grand Illusion”, the title track from their 1977 album. Every flawless note rang out true to the recording, and there is a perfectly reasonable explanation for that: Styx is a band that is perpetually on tour. According to the band themselves, they only take occasional breaks for short periods. Anybody touring that frequently is going to perform their catalogue masterfully.

After performing “Fooling Yourself,” Gowan spoke: “What a wonderful way to ring in the new year!” Standing at the foot of the stage, he remarked, “My, you’re all so close,” as he addressed the theater’s intimate layout.

The spotlight settled on him at the keyboard as and an iconic piano riff pierced the crowd, igniting their collective nostalgia. “Lady” is one of those songs that everyone imagines will be playing in the background when they lay their eyes on their soulmate for the first time. Again, it’s eerie how well Gowan embodies Dennis DeYoung, both vocally and instrumentally. It was not the first song the whole theater sang in unison, nor would it be the last.

When Shaw approached the mic, he explained the origins of their 16th album, The Mission, before introducing “Radio Silence” for the waiting ears of all in attendance. The opening synth has that instantly recognizable Styx DNA. That this was not a radio single is baffling. In fact, Shaw himself has expressed frustration with the neglect that great classic rock bands experience in the new age of the music industry. It is almost prophetic of the band that you cannot hear a song called “Radio Silence” on the radio. It is a fantastic track and deserves more attention.

The next tune was off of 1975’s Equinox. “Lorelei” seems like one of those songs that everyone knows but has no idea what it is called or who sings it, like an old friend you ate lunch with at work, but never learned their name. Young absolutely nails the lead vocals in place of DeYoung’s  studio recording. Another striking revelation was that the bands harmonies were pristine. These are men in their early to late sixties, the oldest being founding member Panozzo at seventy years old.

Shortly after “Lorelei”, Shaw recalled a conversation he had with Young in 1975, and explained how he came to join the band. Taking Young up on his offer to come to Chicago, Shaw brought a song he had been working on. It was a great song, but “it wasn’t a Styx song” according to Young, who Shaw calls “The Godfather of Styx”. From that story, the audience learned how “Crystal Ball” was written, and Shaw was only too happy to demonstrate how beautiful his two-tone sunburst Fender 12-string acoustic sounds. With impeccable timing, a roadie hopped up onto the stage to hand over a Les Paul for the solo before swapping the Jumbo back for the outro.

As expected, the band played a couple more hits with “Light Up” and “Man in the Wilderness” before closing out the first half of the show with another anthem from the Paradise Theater﻿ album, “Rockin’ the Paradise.” It wasn’t long before the house lights came back up for a short intermission, when Young promised another hour of music after they returned.

The second half of the show kicked off with another Young-led hit from The Grand Illusion, “Miss America.” Styx is currently rehearsing for a special show in Las Vegas where they will play the entire The Mission album from start to finish. Fans attending this show were treated to a sampling of what is to come when they debuted six of those songs in order from the second half of the album. The suite of songs began with “Time May Bend” and continued through “The Outpost” and this night was the first time they had ever been performed live. They even welcomed the album’s producer and co-writer, Will Evankovich on stage to contribute to the instrumentation and vocals.

Eventually a roadie produced Shaw’s vintage Fender Electric XII and it’s a dead giveaway to the guitar-savvy fans that “Suite Madame Blue” was coming, and it was impeccably played from start to finish. Immediately after, the fans were finally treated to what many were waiting for… “Too Much Time On My Hands” (watch the Paul Rudd and Jimmy Fallon shot-for-shot remake) from 1981’s Paradise Theater. The maniacal keyboard part of the song is indicative of the genius that Dennis DeYoung endowed upon the group; however, this does not imply they are lacking anything from his departure. This band is so well-oiled that his absence is hardly noticeable.

As the applause died down, most of the band left the stage, but Gowan remained and took the spotlight to turn the venue into a “piano bar” with a pair of fantastic covers. The first was a phenomenally accurate rendition of Elton John’s “Rocket Man” for the appreciative audience. The second cover was a beautiful recitation of the intricate operatic section of Queen’s “Bohemian Rhapsody”, and the entire crowd once again sang along to every word. They are truly a fortunate group to have stumbled across such a talented frontman. Gowan alone should be a major factor for anyone even considering going to a Styx show. He alone is absolutely worth the cost of admission.

Still alone on stage, Gowen started into the piano intro to possibly their most famous hit, “Come Sail Away”, which was also featured on The Grand Illusion. The band shuffled back out to bring it home and it seemed to be the perfect crescendo to end the show with, guitars blazing and fans jumping up and down. As the last note is struck from the guitars, and the last cymbal smashed, the band removed their straps and handed off their instruments to the roadies while they made their way off the stage before turning around amid the raucous applause and walking right back out for an encore.

To thunderous applause, they opened back up with “Mr. Roboto,” the drum fills echoing throughout the small space with noticeably fewer audience members, many of whom ran out to their vehicles when they believed the show was over. This is a big deal for one simple reason: They had never performed this song on stage with the full band before this tour. Previously, Dennis DeYoung had always sung a version of it with pre-recorded tracks. Once he left, the band abandoned it for the following decades. The fact that they are playing it as an encore now is kind of ironic.

The fitting final number of the evening was the signature rocker song “Renegade”, Shaw’s self-penned hit from 1979’s Pieces of Eight.

The acapella opening lines beckoned the crowd once more to accompany the band, offering a fitting and crowd-unifying conclusion to a consistently powerful and nostalgic evening with a gargantuan pillar of classic rock. As any great performers are wont to do, Styx left the Phoenix audience delighted and fulfilled, yet eager for more. Fans might have had their thirst satiated if they bought tickets to the show the following night at the same venue. And if the rock gods will it, perhaps Arizona will be graced with a future performance from the legendary American musical mainstay.

6 thoughts on “REVIEW: Styx Rocking In The Round, Their First Night at Celebrity Theatre (1-11-19)”