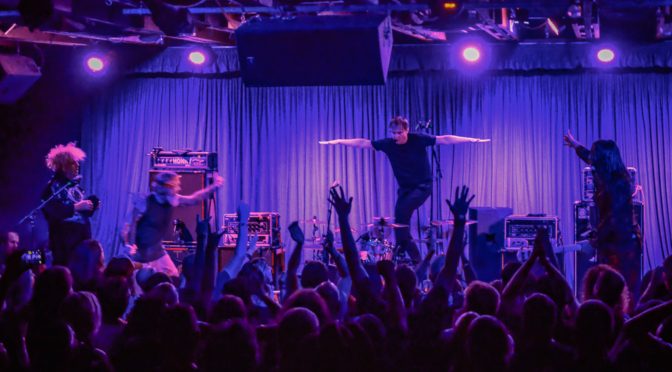 PHOENIX — The Melvins concluded the spring portion of their ambitious two-part 2018 tour schedule to promote the April 20th release of their album, Pinkus Abortion Technician

, at The Crescent Ballroom on Thursday, May 31. Los Angeles-based rock band All Souls warmed up concertgoers with songs from their newly released self-titled album.

Rockers of all ages flooded the intimate venue to experience the heavy, experimental sounds of one of the most influential and notable grunge/sludge metal bands to pave the way for the likes of Nirvana and Pearl Jam. The drinks flowed and the smell from the food being run from the kitchen to Cocina 10 permeated the venue as All Souls hit the stage.

After a quick introduction, they jumped right into the music with their melodic, guitar-heavy sound that ranges from deep and dark, to grunge, to downright ethereal. All Souls, comprised of Drummer Tony Tornay, (formerly of Fatso Jetson), bassist Meg Castellanos and guitarist/vocalist Antonio Aguilar (both formerly of Totimoshi) as well as guitarist Erik Trammell (formerly of Brothers Collateral) proved that, though they’ve only been together for 3 years, they’ve uncovered a winning combination of musical talent to generate a polished sound worth listening to on repeat. At then end of their set, Trammell thanked the Melvins for a “blissful” five week tour together to which Meg added that it also included a broken foot. This concluded the band’s stint with the Melvins, who take a small break and then tackle another ambitious 5-week tour schedule to include four nights in Canada.

Following All Souls’ performance was the anxiously awaited Melvins who planned to take listeners on a musical trip through their discography that spans 34 years. Their newest creation to add to their collection is Pinkus Abortion Technician, which pays homage to the likes of The Beatles and The James Gang. The album brings bassist Jeff Pinkus from the Butthole Surfers back on a collaboration once again to create a whole new sound along with fellow bassist, Steven Shane McDonald, who joined the band in 2015. The Melvins have toured with two drummers and also with two lead guitars, but having two basses is a first. Being the experimental musicians they are and willing to take a chance, they brought forth a sound rarely experienced. The walls reverberated with what felt like a collective heartbeat, a depth of sound that had audience members moving their heads in unison.

The band came out to experimental pedal and guitar sounds that primed the audience for the journey they were about to embark on for the next few hours.The musical journey began with visceral and gritty “Sesame Street Meat” off their 23rd studio album from 2014, Hold It In, on which bassist Jeff Pinkus collaborated. Drummer Dale Crover was immediately seated and fitted with his over-the-ear mic, while outgoing bassist McDonald dazzled with a series of high kicks. Bassist Jeff Pinkus took stage right, where he remained the majority of the evening deeply engrossed in his music and showing an occasional glimmer when his guitar hit the light just right. Guitarist and lead vocalist Buzz Osborne restlessly moved about the stage as though energy were traveling through him in a higher capacity than he could possibly emit. Next stop was 25 years in the past with “At A Crawl”, followed by a zig zag to “Kicking Machine” from 2008’s Nude With Boots, which brought the crowd to a higher level of excitement when a mosh pit ensued. Next were two covers: David Bowie’s “Saviour Machine” sung by Steve McDonald and Red Kross’ “What They Say” which had all-hands-on-deck vocally.

Buzz Osborne took front and center once again with “Anaconda” off of their 1991 album, Bullhead. Next up, Buzz got into character over dead silence and sauntered up to the mic with a smirk to tell everyone, “Well… well… well, I’ll be moooving down to Floriduh,” to kick off the Butthole Surfers’ “Moving to Florida” with a mix of their new song “Stop Moving to Florida” off Pinkus Abortion Technician.

Other notable mentions are McDonald’s long locks blowing in the wind of the fan off on stage left, his Superman move of pulling his blazer open to show his sparkly “punk rock” written across his chest, and one cannot forget the slower tempo of “Don’t Forget to Breathe” off of the new album, with credits for writing going completely to Pinkus.

The Melvins ended their energy-fueled, seventeen-song setlist by taking fans all the way back to the beginning with “Eye Flys” from their debut album Gluey Porch Treatments. Drummer Dale Crover’s elbows were moving at seemingly lightning speed, reminding everyone why he was worthy of a shout out during Nirvana’s 2014 Rock and Roll Hall of Fame induction.

As the crescendo of the last notes of the night filled the room, shook the ground, and flooded the ears of each fortunate audience member, Crover stood up and dropped his drumsticks to a crowd of sated fans who uproariously applauded. Drenched with sweat and playing with the same amount of gusto as the first moment they set foot on stage, it was evident that the Melvins have the masterful talent of a band that has been around for 34 years and the ambition to put on a show for their fans like a band that is just up and coming.