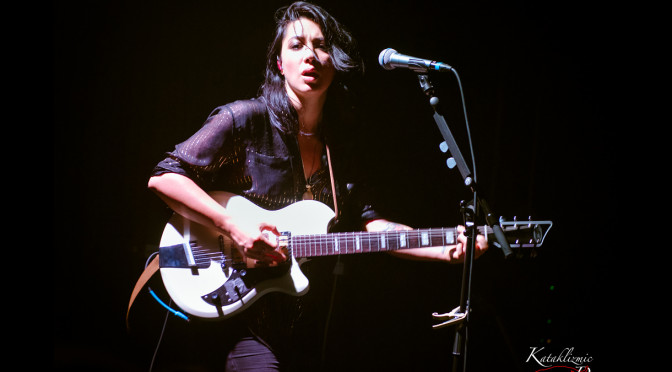 PHOENIX — Even the intense July heat could not exhaust the bubbling excitement surrounding the sold out Crescent Ballroom last Wednesday night as fans of all ages poured into the venue, ready to watch Michelle Branch take the stage. It was almost as if the city itself knew that one of it’s own had come home. Once inside, people gathered in little bundles or nestled themselves in corners and around tables in the bar, loudly chattering with excitement for Michelle’s set to begin.

In the concert area, the opener HAERTS had just begun, guiding the audience into a mellow atmosphere that would last throughout their set. As the songs continued, it was apparent that the crowd was not going to do this band justice. Side conversation and constant movement drowned out the soulful lyrics vocalist Nini Fabi sang. However, the fans closest to the stage were completely entranced by her beautiful words, and could be seen swaying back and forth.

As soon as HAERTS took their leave from the stage, everyone in the room gathered close and waited in anticipation for Michelle to come on. She was met with rousing applause and cheers as she came from backstage, and without a word strapped on her guitar, and went right into her first song, “Last Night.” Like most of her set, the first song and the two that followed came from her brand new album Hopeless Romantic, which was released back in April of this year.

People who listened to her music before know Michelle Branch to have more of a pop/country vibe to her music. However, this time she has completely revamped her musical style, and it showed as she went effortlessly from one song to the next, dancing around the stage or making subtle hand movements around the mic as she sang. The crowd was loving it, especially during the third song “You Get Me” when she suddenly exclaimed “Phoenix how you guys doing tonight?! It’s so good to be home, even if it is too hot to go outside!” This was met with loud, amused cheering. Along with their excitement came a moment of uncertainty however, as to how to respond to her new style of music. There were various people moving back and forth or clapping lightly to the beat. Some were even singing along or just cheering the entire time. It took until she played “All You Wanted” for the crowd to really get into it. She took a different approach to the old crowd favorite, slowing down the tempo and singing in a lower pitch, but that didn’t stop everyone in the room from singing along joyously to the lyrics they had come to know and love.

Once the thunderous applause died down from our first moment of nostalgia that evening, she took a moment to talk about her new album and the steps that it took her to produce it. After that she took a moment to introduce us to her “family from the road”, including her drummer and now fiance Patrick Carney who also happens to be the drummer for The Black Keys. When the introductions concluded, the lights dimmed as Michelle and her female band mates gathered around a microphone and prepared to “bring a little Nashville to Phoenix” with their rendition of “Leave the Pieces” from Michelle’s 2006 album Stand Still, Look Pretty

, which she produced as part of the band The Wreckers.

She then continued our trip down memory lane with a slow tempoed, almost seductive version of “Game of Love,” written and produced with Santana. She rounded out this part of her set with the ever popular “Breathe” which produced the biggest crowd response of any song so far. Everyone was up and dancing, jumping up and down to the beat, and singing loudly to the words, threatening to drown her out completely. Even the band moved around the stage as they played, giving off the exact vibe expected to come from her show.

Wanting to bring the focus back to her current album, she finished out the show playing more upbeat songs, not stopping as she effortlessly navigated through “City”, “Fault Line” and “Living in a Lie.” The energy from these songs was enough to keep the crowd fully drawn in, even when she had to pause a time or two in between songs to tune her different guitars. She brought the set to a close with one last oldie but goodie “Are You Happy Now?” Following her flow from earlier on in the show, she slowed this one down as well, singing very closely to the mic while keeping her eyes closed. The vibe around the whole room was warm and satisfied as they gently swayed in unison to the lyrics in the dim lighting. She was met with a resounding applause as she stated a simple, “Thank you Phoenix”, and left the stage with her bad in tow.

She didn’t make it far before the crowd exuberantly began yelling “Encore!!”. This went on for about a minute before Michelle and her band returned to the stage. She began by thanking Haerts for playing with her that evening, explaining, “I listened to Haerts a lot while writing this new album.”. Then, she went on to remind us one more time, “It is so nice to be home! I cannot believe I’m playing here again.”, giving us all a sense of pride to share our hometown with her.

She finished her set by singing two more old favorites; the soulful “Goodbye to You” and an unexpected solo version of “Everywhere.” Before starting her final song, she made a promise to the crowd that. “it won’t ever be this long ever again” in terms of her producing new music. Almost as if she didn’t want the show to end, she beautifully sang the lyrics of her biggest hit in a sensual, almost haunting manner, keeping the crowd entranced up until the last note.

“Thank you again Phoenix”, were her parting words as she waved at everyone as she exited the stage, hugging people along the sides as she went. As the crowd left the concert area, there was a feeling of content in the air knowing that everyone got exactly what they wanted from this show, and that it will not be another decade before we welcome Michelle home once more. 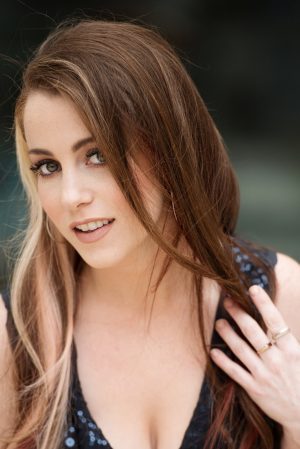