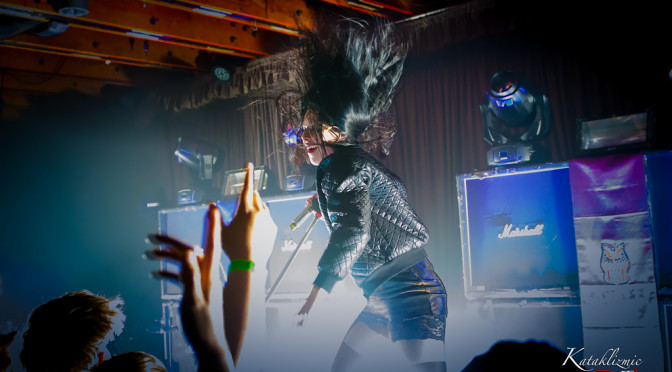 PHOENIX — If I were to describe Sleigh Bells’ unique brand of feedback-laden experimental electro-pop, I’d probably tell someone to imagine the sound that the nighttime cinematography of the film Drive would make if given human form. While admittedly a bit obtuse, I couldn’t help but think of wet streets, leather, and neon once the guitar cabs kicked on and assailed a sold-out Crescent Ballroom with danceable abrasion.

From the moment the duo of Alexis Krauss and Derek Miller hit the stage, every member of the audience was off their feet and dancing in a writhing chaotic mass. Touring as a two-piece in direct support of November’s Jessica Rabbit

seemed like a potentially risky choice given the album’s emphasis on volume and upbeat power. Thankfully, the duo effortlessly executed their career spanning setlist with more energy and precision than is often afforded by an entire tour package.

, I was impressed to see how the band had continued to expand on their signature sound while remaining true to the shredding meets dance floor aesthetic that Sleigh Bells fans have come to worship.

This manner of growth was perhaps most notable on Jessica Rabbit lead off track “It’s Just Us Now”. Played third in their setlist, the dramatic build of an almost Southern Rock riff alongside a surprisingly hip-hop leaning drum sample into a soaring vocal chorus over a tempo breakdown showcases the band at their absolute best. Even the title itself is reflective of the band’s confidence in themselves. They aren’t bound by hype, touring members, or notions of what they should sound like. They are simply two artists at the top of their game trying to push their music, as well as dance floors, to the absolute limits.

Above all, it was clear that the band was having just as much fun as the crowd. Alexis bounced from one side of the stage to the other, interacting with the crowd and positioning herself for photo ops, while Derek let his metalcore roots show as he headband at the front of the stage all night. Feeding freely from the energy onstage the crowd even broke into a push pit for a few songs, which seemed somehow natural despite it’s unusual setting.

As the evening finally wound down, Alexis brought opening act Tunde Olaniran onstage for a brief duet appearance before closing their set with A/B Machines from debut album Treats, then disappeared out the venue doors while the crowd finally paused to take a breath.

Highlight: Opening act Tunde Olaniran was absolutely astounding. Blending soul funk with trap EDM beats was the perfect way to set the crowd up early for an evening of high paced dancing while drawing even the most introverted audience member out of their shell for a night. Bonus shout out to the guy wearing an Agitator shirt who looked genuinely lost the entire night.