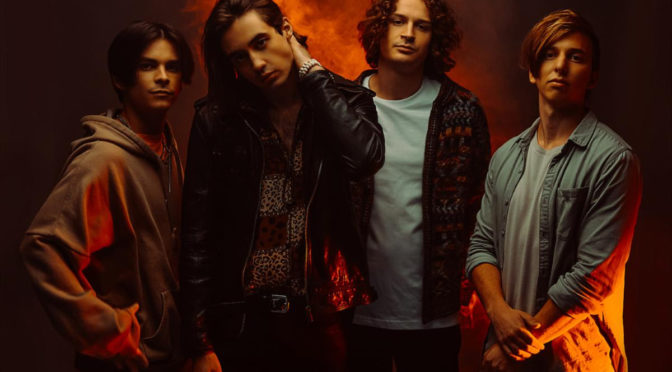 Los Angeles, CA — Emerging Aussie four-piece, The Faim, have released their long-awaited debut album, State of Mind, today via BMG. The full-length effort is available to stream and download HERE.

Created over the course of two years with numerous songwriters and producers, the record includes a collection of songs that showcase a vast range of styles and tones. Upbeat anthems like “Humans,” “Summer Is a Curse,” and “Beautiful Drama,” reveal the group’s skill at crafting resonant pop-rock hits, while “Tongue Tied,” “Buying Time,” and “Amelie” are saturated with fiery rock riffs. Melodic closing tracks, “Where the River Runs” and “State of Mind,” also underscore the quartet’s knack for authentic and raw songwriting. Overall, the album shows a band on the ascent, and a group of musicians who are all about making genuine songs that bring people together to create a community.

“We can’t believe that our debut album, State of Mind, is finally out! This record has been a long time coming and highlights our development since the writing process began a few years ago,” says The Faim. “State of Mind is a huge step for the sonic direction of our band, delving into territories that push the boundaries of what we’ve experimented with previously. We hope that people find something special and unique in these songs and enjoy them as much as we do!”

Currently on the cover of Rock Sound Magazine and fresh off of a successful headline run across the U.K. and Europe, The Faim will be heading back out on the road in celebration of State of Mind this fall. The outfit will first embark on a massive co-headline tour across the U.S. with fellow Aussie band, Stand Atlantic. Live Nation’s Ones To Watch and The Noise are confirmed to present the entire run of dates. The trek kicks off next week on Tuesday, September 17 in Houston TX and plays in 25 total cities nationwide, including major stops in Atlanta, New York, Boston, Philadelphia, Chicago, and Los Angeles. After a short break, the band is set to close out the year with another batch of headline dates overseas. A complete touring itinerary can be found below, and all tickets can be purchased on The Faim’s official website HERE.

Over the past year, The Faim has amassed a strong following around the world, to say the least. To date, the group has played 183 shows across 16 countries, in addition to performing at European festival staples including Reading & Leeds, Lollapalooza Berlin, Download, and Slam Dunk. They’ve also sold out shows in London, Sydney, Amsterdam, and Hamburg, toured globally with PVRIS, Andy Black, and Sleeping With Sirens, and collaborated with the likes of John Feldmann, Pete Wentz, Mark Hoppus, Josh Dun, Ashton Irwin, and more. “Summer Is a Curse,” the title-track from their critically acclaimed debut EP (2018 via BMG), has become a bona fide hit in Germany, hitting #12 on the airplay charts after being played 24,000 times on German radio that year. The earworm, which appears in a Jeep commercial in France, hit #2 at radio in the Czech Republic. The Faim also scored the soundtrack to Coca-Cola‘s global advertising campaign for Coke Zero, which was shown in 18 countries worldwide.